Posted in: No Huddle by Jeremy Butler on January 9th, 2017 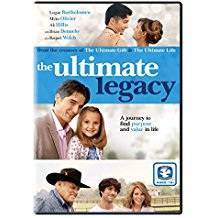 And the Ultimate Legacy makes three, marking the third installment in what will undoubtedly become known as the “Ultimate” series. Please don’t misunderstand my meaning; I say that as a good thing. Granted, before I watched the film I would have likely said that sardonically, but I must admit to being genuinely touched by the story and have gained an appreciation for the message behind it. Given this is the third go-around for the franchise, the themes and some of the cast is already well established by this point, which opens it up to becoming boring and stagnant; however, despite those obstacles it remains fresh and engaging. It is definitely a movie that should be shared with the whole family.

Joey Anderson (Myko Oliver) left home as soon as he was able and has never looked back, embracing his life as a nomad and enjoying his wanderlust as the thought of home only holds bad memories in his opinion. However, he has no choice but to return following the death of his grandmother. Determined to just pay his respects, collect his inheritance, and get back on the road, his plans are interrupted when he discovers that he can only collect his inheritance if he completes stipulations that were laid out by his grandmother and being carried out by her legal team which includes the retiring (reprising his role from the past two films) Mr. Harrison (Bill Cobbs) and his team of experts, which includes Jason Stevens (Logan Bartholomew, Ultimate Life),who is brought in to help Joey with his assignment after completing his own assignment. Joey is unhappy with the situation, especially given that one of the stipulations is that he remains at the infamous Anderson House for a year period.

To claim his inheritance, Joey must perform twelve assignments, or gifts, each representing a different lesson such as work, money, friends, learning, dreaming, etc. With every assignment, Joey finds himself confronting an element of his past that he buried years earlier. The ordeal doesn’t just affect Joey. Jason begins to sympathize with Joey after learning more about the circumstances which inspired Joey’s long absence. Before long, like those who came before him, he begins to realize that this journey has little to do with the monetary gain that he originally sought and more about reconciling his past.

So I have never been one for the Hallmark touchy-feely type of movies. However, when a film is done right, it is important to recognize it. The Ultimate Legacy was done right; from the story to the cast, it was done right. However, it is not enough to say that; I need to elaborate. To start, the returning of established cast members from the previous stories such as Mr. Harrison, Gus, and most importantly Jason Stevens provided familiarity and smooth the transition back into this world. With the return of Jason Stevens, the story gains a new perspective and additional depth for this character. Before, Stevens was the focal point, but now he is an active participant in the growth of someone else. Additionally, his presence provides a unique perspective, as he is able to draw on his own experience in order to help Joey come to terms with his circumstance.

Focusing on the people that made the story great, I want to address the newcomer first, as he without question proved his mettle among the cast of regulars. In the beginning, Myko Oliver managed to balance being likeable while still being entitled and slightly obnoxious. This balance served him well as it made his change towards the better side of his nature more organic and easier as he proved himself capable of selfless acts from the very beginning.  Another person worth mentioning is Logan Bartholomew, better known as Jason Stevens. His return is the most important of all those that returned in my opinion, as it shows that a character’s journey doesn’t end after they receive their ultimate gift. He proves himself a vital part of the story and eventually becomes a champion for someone whose shoes he was in just years prior.

The story manages to remain fresh and engaging despite recurring themes. I believe much of this has to do with the fact that the main character exhibits redeeming qualities earlier on in the story, specifically, assisting a stranded woman. The difference between this character and the subjects that came before him is also addressed in the story by the cast. For me that showed that the movie was capable of self-awareness and on a subconscious level informs the audience that this tale is not like the others that they observed.

In conclusion, I am not normally a fan of sequels, but this is one that I would gladly watch again, ideally with a loved one or the whole family.  The Ultimate Legacy is tale that must be shared and receives one of my highest recommendations.

Jeremy Butler is a film school graduate of the International Academy of Design and Technology. He is been writing for Upcomingdiscs since 2012; however, movies have played a big part of his life for much longer. Favorite genres include horror, science fiction/fantasy, and comedy. Favorite movies are V for Vendetta, Boondocks Saints, Kiss Kiss Bang Bang, and The Godfather.
12 Days Of Christmas Giveaways – Day 12: Mission: Jimmy Stewart and the Fight for Europe By Robert Matzen 31 (Blu-ray)