Posted in: No Huddle by Brent Lorentson on February 23rd, 2017 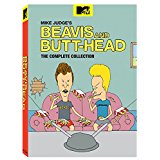 Before there was South Park, in 1993 MTV released the coolest cartoon that was out there when they began to air Beavis and Butt-Head.  When it came to animated shows, there really wasn’t much out there that appealed to the average teenage boy, but MTV understood their audience and took a chance on creator Mike Judge’s little series that was virtually an overnight sensation.  The blend of having a short animated series mixed in with music videos that the show’s characters would deliver their commentary from the torn up sofa was the perfect blend for what would be an unexpected pop-culture movement.  Looking back at the series with older eyes, I can understand why my parents rolled their eyes about my urgency to get home to watch the new episode of Beavis and Butt-Head.  They were crass, they were stupid, and their only goals in life were to get laid and eat nachos; basically they were not so different from my friends in high school, only an exaggerated version.  Now it’s 2017, and MTV has put out a massive 12-disc set that contains all the episodes, a variety of music videos, behind-the-scenes features, and even the feature-length film.  After taking my trip down memory lane and feeling as though my brain has melted into a pile of nacho cheese, I’m here to deliver the verdict.

For those who somehow have never heard of the show, Beavis (blond Metalica t-shirt-wearing teen) and Butt-Head (brown-haired AC/DC t-shirt-wearing teen), are a pair of teens who lack intelligence and ambition but manage to plod along through life and get into some crazy situations.  Despite the many faults of the duo, for the most part they are your typical teenagers who just want to have a good time.  In a strange way I almost could say the two and their attitude on life is something so basic that perhaps their key to happiness is simply not thinking about their actions and just doing.  We see them get bullied by the town trouble maker Todd; they are rejected by their peers, they live in terrible conditions with no parents in sight, but together the two seem to manage to get through any situation.

Mike Judge (who also voices the main characters and several others in the show) deserves so much credit for this show that was well ahead of its time as it examines teenage life and struggles and reflects it through the eyes of these slackers.  I’m not attempting to say this is quality PBS programming, but there is a lot more going on beneath the surface of the many sex and fart jokes.  Characters like Daria (who would later be developed into a character with her own series) and Van Driesson (their hippie teacher) help usher a little depth to the show by trying to offer insight to Beavis and Butt-Head, though sadly anything said is quickly forgotten.

Whether it’s a failed attempt to wash a neighbor’s dog so they can be named in his will,  or the boys discovering trick or treating (yeah I laughed till I cried on this one), to an emergency room visit after Beavis scorches his butt, the guys have no limit to their stupidity.  Even when the boys get jobs at a burger place, it of course goes terribly, and it’s impossible to believe anyone could be so dumb; these guys never cease to amaze.

Still scratching your heads on the appeal of the show, or if you’re wondering what episode you’d like to try to introduce someone to the series, I’d recommend “The Great Cornholio”.  It’s not an episode with dramatic flair; instead we get to see what happens when Beavis ingests too much sugar and transforms into Cornholio.  It’s one of my favorite episodes, and it has stuck with me over the years and still holds up.  Is it stupid and childish? Yes, it is, and I don’t care; it still has me laughing hysterically.  I have a laundry list of favorites that this collection allowed me to revisit and even experience episodes I missed or simply forgotten.

For those of you who were fans of the show, I’m sure you remember how the music videos would break up the episodes.  Here is the bummer: the episodes for the first three volumes are music-video-free.  Don’t panic, though, because a collection of the videos are put on a separate disc along with other supplemental material.  We even get a multi-part documentary about the origins and lifespan of the series that is a must-watch for fans.

Then there is volume four in the set; this is the reboot season that aired in 2011.  What I appreciated most with this collection of episodes is there is definitely some maturity in the writing and the pacing of the episodes and more consistency with the humor.  It’s great seeing the duo together and at it again as we see them as Tech Support workers or even an episode where they rescue a rat and attempt to have it as a pet.  Just as South Park uses its characters to address a social commentary, we get that with this volume. I just wish we got to see them address more controversial issues.

One major drawback of the rebooted series: instead of music videos we are offered the Beavis and Butt-Head commentary of the MTV shows like Jersey Shore and Real Life.  I have a hard time believing our guys would ever be watching these shows, and if they did, I feel their commentary would be a lot harsher, but the guys do make a few funny jabs.

To close out the set there is the 12th disc that contains Beavis and Butt-Head Do America, the feature-length film.  While the film definitely keeps everything that made the show great, the creators definitely went out of their way to tell a bigger story.  This time around Beavis and Butt-Head run into Muddy (Bruce Willis), a criminal who hires the duo to “do” his wife.  Well, the boys happily take the offer, not understanding they are being hired to kill the wife.  Luckily Dallas (Demi Moore) is ready and waiting for the boys to “do” her, and she flips the script on them.  Things spiral out of control, and in the process Beavis and Butt-Head manage to become wanted by the FBI, and the zany road trip comedy only spirals out of control from there.

While I do believe there are some episodes still not included in this set, this is a great set to own for those who are fans of the show and are looking for a fun, nostalgic trip back to the 90’s.  This is the show that paved the way for South Park and Family Guy, but also inspired many to just want to sit back, eat nachos, and watch music videos.  Beavis and Butt-Head will forever be the ultimate slackers.  Some may take pleasure in looking down on the show, and that’s fine; this show isn’t for everyone and never tried to appeal to everyone, but if you can appreciate some lowbrow humor, sit back and enjoy the show.

Brent Lorentson is a horror writer and film critic based out of Tampa, Florida. With a BA in Digital Film, he co-wrote and co-directed Scavenger Hunt. His short stories have appeared in various horror anthologies. In 2019 his short script Fertile Blood will be a part of the anthology horror film Slumber Party. He is currently working on his first novel A Dark and Secret Place set to be released in late 2019. Favorite Films: Taxi Driver, Fight Club, I Saw the Devil, The Wild Bunch, Dawn of the Dead, A Clockwork Orange, Pulp Fiction, Heathers, The Monster Squad, and High Fidelity.
Exclusive Interview With Robert Matzen: Author Of Fireball: Carole Lombard and the Mystery of Flight 3 Get Out