Posted in: The Reel World by Gino Sassani on April 1st, 2017 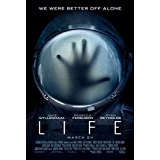 Yes, Life is very much a knockoff on the basic premise of 1979’s Alien. That’s not so much of a problem for me. It’s become increasingly true that there are few truly original ideas remaining, at least in Hollywood. And while it’s trendy to complain that this is the unique state of affairs of our time, that isn’t really true either. Alien itself was pretty much a knockoff of the 1958 classic It The Terror From Beyond Space, where a vicious life-form is a stowaway on a ship sent to rescue the lone survivor of a Martian expedition. In all three films we are treated to a claustrophobic rendition of Agatha Christi’s Ten Little Indians as an alien creature picks off the confined astronauts one at a time. No, a film doesn’t need to be terribly original in order to be entertaining. And Life certainly has its entertaining moments. More technologically advanced than its predecessors, the film is quite visually stunning. Unfortunately, it devolves pretty much into a slasher film in space. Instead of hapless and stoned teenagers making the kind of stupid mistakes that play into the hands of a maniacal killer, we have men and women who are supposed to represent the best and brightest planet Earth has to offer… making the kind of stupid mistakes that play into the appendages of a maniacal alien creature.

It is the near future, and the astronauts aboard the International Space Station are about to make history. Their mission is to intercept a drone capsule that is returning from Mars with soil and rock samples. After a rather shaky capture the material is brought on board, where Dr. Hugh Derry (Bakare) isolates a sample of a primitive life-form. What do you do with the first evidence of life outside of Earth? You attempt to bring it back to life, of course. It becomes a global event as schoolchildren compete to name the life-form. The best they could all come up with is Calvin. I can only assume Hobbes is going to appear in the sequel. Naturally, Calvin grows at an accelerated rate and breaks out of its containment lab. Obviously, this had to happen, but it’s not the predictability of the plot point that I found distressing. It’s how incompetent the station and its personnel are in dealing with the inevitable escape. Of course the creature continues to grow and evolve, leading to some rather gory death scenes in the film. Eventually, the creature has its sights set on Earth, and the astronauts must find a way to stop that from happening. I’ll leave it to your movie-going experience to discover how that all plays out.

The film sports a pretty good cast that doesn’t ever really come together as a unit. You have Ryan Reynolds, Jake Gyllenhaal, and Hiroyuki Sanada, all very good actors. The script just doesn’t give them much to do. When you consider that these actors are confined in a small space, I am amazed at how few character moments there really are here. I can’t pick out an outstanding performance, because no one is given the time or material to make that happen. Perhaps it’s the obvious inexperience of director Daniel Espinosa or the weak script by writers Rhett Reese and Paul Wernick. You might even blame the editing, which provides for awkward pacing and too many leaps of logic. The result is a film that relies almost entirely on the fantastic visuals and f/x. The creature design didn’t really do anything for me. It comes across more creepy than frightening. Maybe that’s why Espinosa believed he needed to up the gore to slasher film levels.

I don’t quite understand why the big bad in too many films has to capitalize on the mistakes of the victims. We expect those terrible choices from teenagers, but not from a crew selected from the entire world’s population to be here in this position. It would be far more rewarding to see this creature have to match wits with clever decisions. Instead the station is ill-prepared for the task. The isolation protocols are horrible, and they even run out of gas in the station. Really? Are you $%*& kidding me? It appears everything about this film might have been rushed. Sony wanted this thing out there on a tight schedule. The question becomes why.

That question has become the subject of some rather intense but friendly debate here in the Tampa film critic circle. There are those who believe that this film is an unannounced prequel to the Venom film that Sony has announced for next year. Venom, of course is the symbiote that becomes one of Spider-Man’s foes. We saw a poor version of the character in the third Raimi Spider-Man film. That debate has even grown to include a possible Carnage film. Carnage is an offspring of Venom in the Marvel universe. I really don’t believe any of that is true. Some here (Dwight) are convinced. I’m convinced that the rumors were likely started at Sony in order to breathe more life into a rather listless sci-fi/horror film that might otherwise get little notice.

There are two reasons for my conclusion. If this had been a prequel to any of those films, you would have seen some Marvel involvement in this film. There is a common misconception when it comes to the movie rights to Marvel characters. Sony doesn’t own these characters any more than Fox owns the X-Men universe. Marvel still owns the characters and is involved in all of those films. It is only film rights that these studios own. They still require Marvel involvement. You might have noticed the flashing comic pages of Marvel Studios when you saw Logan, a Fox film. The second is the involvement of Ryan Reynolds. Marvel does not like to have actors who play major Marvel characters appear as others in these films. No way the Deadpool actor would have a bit part in a Venom prequel. Of course, you can decide for yourself. It’s a pretty good marketing gimmick, though… right? “Cue Instagram.”

Gino Sassani is a member of the Southeastern Film Critic's Association (SEFCA). He is a film and television critic based in Tampa, Florida. He's also the Senior Editor here at Upcomingdiscs. Gino started reviewing films in the early 1990's as a segment of his local television show Focus. He's an award-winning recording artist for Omega Records. Gino is currently working on his 8th album Merchants & Mercenaries. Gino took over Upcomingdiscs Dec 1, 2008. He works out of a home theater he calls The Reel World. Favorite films: The Godfather, The Godfather Part II, The Body Snatcher (Val Lewton film with Karloff and Lugosi, not the pod people film), Unforgiven, Gladiator, The Lion King, Jaws, Son Of Frankenstein, The Good, The Bad And The Ugly, and Monsters, Inc.
Trainspotting 2 The Zookeeper’s Wife