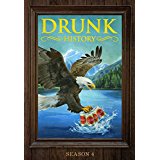 Drunk History is a good example of a good idea that lost steam very quickly. I remember when initial idea was aired as a web series produced by Funny or Die in 2007, and it was a rather brilliant idea. The show was not picked up by a major network for six years; then in the summer of 2013, it made its premiere on Comedy Central. Granted, I remember being excited about this premiere. However, about midway through that first season, I realized how too much of a great idea can be a bad thing. The format just became tiresome and dull after a few episodes. Now, four years later, the show has returned for four entire seasons, but it definitely feels it has run its course.

If you are not familiar with the series, Drunk History was created by Derek Waters, and the format is as follows: Someone from the world of comedy is interviewed by Waters about some historical event as they are getting incredibly drunk. Meanwhile, the show cuts from the talking-head style interview to a dramatization of the event in question, being performed by other comedic actors. However, rather than actually using original dialog, the actors perform pantomime while lip-syncing to the voiceover provided by the drunken musings in the interview. It is this lip-syncing that really makes the show impressive, but the drunken musings provide the primary entertaining content.

In Season 4 not much has changed regarding the format. Many of the players are familiar to me, as they recycled from Season 1, whether they be interview guests or dramatization performers. Here is a brief list of actors you can expect to see in Season 4: Paget Brewster, Michael Cera, Ed Helms, Jenna Fischer, Louie Anderson, Lauren Lapkus, Jenny Slate, Bob Odenkirk; the list goes on. However, this season I was surprised to see cameos by musicians such as Billy Joe Armstrong (Green Day) and Dave Grohl (Foo Fighters, Nirvana), and mixed martial artist, Ronda Rousey. Unfortunately, the familiar faces and surprise cameos aren’t nearly enough content to hold my interest for very long.

The biggest issue with this series is there are an incredible amount of misses in relation to hits when it comes to clever writing and/or storytelling. When the show began as an independently produced web series, it seems as if more care was placed into the episodes as there was more time for production. Each show was produced months (even years) apart, allowing more time for ideas to be cultivated and edited. Now as a network show, the creative process has been sped up, as there are three events told per episode, released on a weekly basis. Meaning, prior to air date, ALL of the episodes are expected to be finalized within the span of about six months. So of course some of the ideas are going to feel rushed.

In the case of Season 4, however, almost all of the ideas felt rushed. Out of the thirty separate events from history, I only found two to be laugh-out-loud funny: Teddy Roosevelt saving the NFL, and William Shakespeare and the theatre heist of 1598. If you are a diehard fan of the show, then this disc would be great for your collection. If you are relatively intrigued by the idea of comedians stumbling over their history in a drunken stupor, I highly recommend you seek out the original web series episodes as they are still funny to this day: particularly Volume 5, where Jen Kirkman discusses a meeting between Abraham Lincoln and Fredrick Douglass.