Posted in: Hardware Reviews by Archive Authors on April 11th, 2004

(out of 5)
Hardware Reviews
Harman/Kardon
Receivers
$1499 US

For those of you who are unfamiliar with the Harman/Kardon name they are one of the preeminent audio manufacturers. The company is owned by Harman International who also owns well known brand such as JBL and Infinity as well as ultra high-end brands Mark Levinson, Lexicon and Revel (never mind the professional audio companies that they own as well). As a matter of fact any time you watch a movie or listen to a CD at one point in time a Harman company product was used in the production of i…. Suffice it to say that when it comes to audio Harmon/Kardon probably knows what they are doing.

The DPR1001 is a little different then the rest of the receivers in the HK line-up it uses a completely digital amplification section which makes the unit a smaller, more efficient and lighter then the typical amplifier. Other then that it is adorned with the features that you would expect in this price range. We have 7 X 50 watts of high current power making the amplifier either a 7.1 set-up or 5.1 with multi-room outputs with the full compliment of surround modes (Dolby Digital EX, DTS-ES, DTS:Neo6 and Pro-logic 2). Also included is a full compliment of s-video and component video switching inputs and outputs. There are 2 optical and 2 coaxial digital audio inputs and one of each for outputs, the best thing about the digital audio connections are that they are not pre-assigned to any of the inputs.

When you set the unit up for the first time (with the on screen display) you tell the receiver what connections go with what inputs. If you are a fan of the new high resolution audio formats (DVD-audio and SACD) this unit will again keep you happy with an 8 channel (think 7.1) direct input giving you compatibility for today and tomorrow.

Two other things of interest to note, for the included surround processing we also have Harman’s exclusive Vmax and Logic7. Vmax does a far better then average job of creating the illusion of surround sound from two speakers and it works very well. Logic7 is another proprietary analogue surround processing that Harman has been using for years in their higher-end brands and it has been slowly filtering down to all of the gear. It does a similar job too what Dolby Pro-logic 2 does with modes for both music and movies but I found the front channels to have a little better focus and better ambience from the rears channels with Logic7.

Lastly we can not forget the remote control; the included commander is of the programmable learning variety and feels very nice in the hands. We have an LCD for reminding us what mode the receiver is in and two large circle buttons with four-way controls that navigate most of the functions of the unit. The thing that sets this remote apart from any other is a button that says EZ-set and the microphone on the top. What do you need a microphone in your remote for you ask, well to assist in setting the speaker levels. One of the most confounding things for the first time home theater user is the speaker level adjustments. To make life easy we simply flip the receiver into one of the video inputs and into the DPL2 movie mode, turn the receiver up to -15 on the volume dial, hit the EZ-set button and then the number of speakers you are using and the receiver will automatically ensure that the speakers are the correct levels. Wow, could life get any easier!

After pulling out my usual receiver and connecting the DPR1001 I sat down, turned on the on-screen display and in 4 minutes flat had the unit configured for my system (DVD, VCR, Satellite, PS2 and 400 CD changer). Next I fired-up the EZ-set and sat back and watched the fireworks, only to find out that I had a problem, I actually needed to move one of my surround speakers because I had it in the wrong spot and could not achieve the proper level for my system, you learn something new everyday.

I sat back and flipped the dish to my favorite TV show (CSI the original not the imitator) and started playing with the various analogue surround modes, all performed very well but the DTS:NEO 6 blew my socks off. This is the first time that I have had the opportunity to play with this and I was very impressed, out of all the options it had the best dialogue intelligibility and focus and matched the excellent rear channel performance of Logic7.

Next I tossed in a movie and sat back to enjoy the show, Reign of Fire may not be the best story but the soundtrack will certainly give your system a thorough work out. With lots of LOUD full range rear channel effects the receiver handled things with aplomb. Next I tried out the atmospheric One Hour Photo and again the receiver just nailed the wide open soundscape of this moody film. The receiver also did a great job with passing video signals with no degradation to the signal.

Next we moved on to some music I threw everything at the receiver from jazz to metal and it handled everything very well. I can say that the usual characteristics of a digital receiver (cold and hollow) where not to be found in the unit. The soundstage was wide and deep and well layered with all the subtlety you would expect to be there. My only complaint was that there was a slight edge to the treble that caused things to be slightly harsh sounding. The other thing I discovered was that when pushed into clipping the amplifier got fairly harsh sounding, in the past I have found that the Harman/kardon amplifiers behaved very well when they start to clip (clipping means that the amplifier is creating more powered then it is specified too which causes the distortion ratio to increase sharply, true high current amplifiers tend to handle this very well) this one then got fairly harsh sounding quicker then I expected. Trust me though I was PUSHING this amplifier to a far greater extent then any normal person would, just ask my neighbors if you don’t believe me.

Overall I was very impressed with this receiver, it performs very well and is adequately featured for the price. I can honestly only come up with two things too pick at, one there is no s-video up-conversion (you would be hard pressed to find a unit in this price range that does not have it) and the display is fairly bright (my components sit out in the open, not behind smoked glass doors) you can dim the display but the bright orange surround mode indicator lights do not dim.

Other then two things the unit is fantastic, great performance, great features and with none of the back breaking weight or searing heat of a typical high current amplifiers. Also factor in that for the $1499 US ($1999 CND) price that you get a Harman/Kardon DVD player included that is worth $349 US ($599 CND) and what a great piece of gear. If you are in the hunt for new gear and want something that performs without the weight and the heat then this is the gear for you. 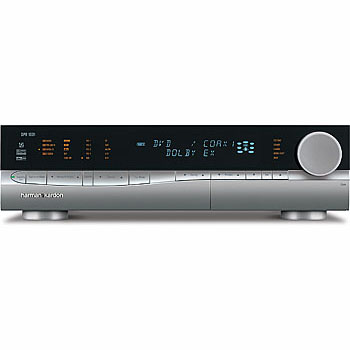 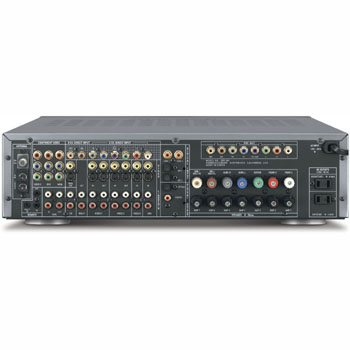 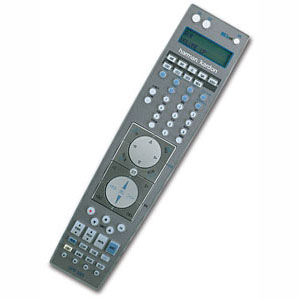