Pandas in the Wild

This week we get a little more mayhem from those great people at Smithsonian Networks: Pandas Gone Wild. Witness the spectacle of Pandas flashing tourists for just a few shoots of bamboo. Okay, that isn’t what this is about. It’s much more tranquil and peaceful than that and takes place in the mountains of China in a secluded sanctuary. The next forty five minutes will produce a lot of oooo and even more awwww moments than I can write about in the next several paragraphs.

Deep in the Shaanxi region (pronounced “Shensi”) along the Qinling Mountains of China is a wondrous sanctuary of wildlife including rare plants and even rarer animals. There is the majestic Golden Monkey, an endangered species that is a glimpse into the old world. There is the Crested Ibis which is so rare that only 70 are still thought to be in existence. Other creatures exist solely because of the dense bamboo that covers the region such as the Golden Pheasant, the Golden Takin and the namesake Bamboo Rat.

However, perhaps the most famous animal of the region is the Giant Panda. These large bears are on the endangered list but about three hundred of them inhabit this region. A group of scientists were allowed access to this very special region in China and took two years to investigate the creatures and bring us back some stunning photography and video of their work. Their first sighting is of a male 200lb panda who feeds on some local bamboo. It takes forty pounds of bamboo a day to feed an average size giant panda.

The crew then finds a male sniffing a nearby tree. The treebark of the area contains many scents. It could be warning of upcoming danger or in this case, it could be a sign of a female wanting to mate. The female spreads their scent into the treebark by rubbing her hind end into the tree. Males like that sort of thing. Then the male usually marks the bark as well. But when two males mark nearby trees that were originally marked by the same female, then a fight usually breaks out. This usually ends in serious injury for one of the bears, and unfortunately an occasional death.

The remaining bear then finds the female who in this instance doesn’t really care for him no matter how much he bellows and cries for her. The female usually only has a few days of fertility and produces a meager 5-8 cubs in her lifetime. Therefore, she often becomes choosy. The crew soon finds a similar situation, but in this instance the male bear is able to mate. The mating process only lasts thirty seconds to a minute (See ladies, you should not complain about five minutes!) and within five months a baby cub is born.

Unfortunately, the female panda is the only one to take care of the cub; the male is usually long gone. The baby cub usually starts out at a mere 3 ½ ounces of body weight but grows at an extremely fast rate of speed. Its usual diet for the first year is their mother’s milk before learning how to digest the precious bamboo. A few very sweet moments are captured when the cub yells for their mom or when the mother panda holds the baby in her arms and slowly rocks her.

In this environment, the panda has very few natural predators or enemies. To be honest, the main enemy of the panda is man. Development in China has increased by an alarming rate and has pushed through the once large boundaries that the pandas possessed in this region. The Chinese officials have realized this issue and have worked with wildlife officials to create this sanctuary where the bears can thrive and live with other animals who feed off the bamboo shoots in harmony.

The Smithsonian Network has done it again here with some beautiful imagery of pandas and lush pictures of the plant life of the region. It is gorgeous and my only problem with the dvd is the length. The documentary weighs in at 46 minutes which is the usual time for a one hour show with commercials. They spend two years on site, and have only forty five minutes of footage? It just seems rushed, and very little time is spent with specifics and we spend the majority of the time with the mating process and the early growth of the cub.

There is some history also thrown in here which help us to learn that the pandas used to be carnivores and developed a sixth digit which helps to feed on the precious bamboo of the region. Even that information whizzes by as they try to fit everything they can into the short period of time given. The footage is mostly spotless except for the occasional minor halo caused by the obvious sunny lighting.

These discs are marketed as ten dollar titles for the Smithsonian Network, and while they are breathtaking and produced many awww moments, they are going to be mostly used for the classroom or to entertain your young ones. By the way, for those with young ones there is nothing objectionable here (unless you are offended by thirty seconds of mating) and this is a great teaching tool. Recommended but with a bit of a warning, you’ll want more and if you have a female watching with you, she’ll probably want one. (Or at least a stuffed animal). 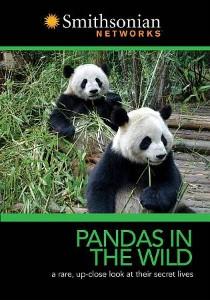 Michael Durr has been reviewing movies for the better part of fifteen years now. He primarily enjoys thrillers, sci-fi, animation and even a little courtroom drama. His favorite films include Escape from New York, the Goonies and anything with Alyssa Milano. When he’s not praising Kurt Russell as the greatest actor of our time or scratching his head over a David Lynch flick, he’s spending time at home in Texas with his lovely wife, Lori and his amazing son. How they put up with him is a mystery, but even Basil Rathbone doesn’t have the time to solve that one.
Milk American Gladiators (The Original Series) — The Battle Begins