Posted in: No Huddle by Archive Authors on December 13th, 2010 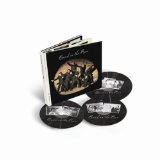 Wings had an interesting story to tell when they completed Band on the Run. Paul and wife Linda McCartney wanted to record a new album at an unusual location. From a list of potential locations, they chose a remote studio in Lagos, Nigeria. Right before the departure date, lead guitarist Henry McCullough and drummer Denny Seiwell quit the band. It was up to Paul, Linda, and fellow member Denny Laine to finish the project. They spent August and September 1973 in Lagos working on the project under difficult conditions. The band suffered with the intense African heat and survived a dangerous mugging at knifepoint. The thieves stole valuables and the album’s demo tapes. The band had to re-record the entire album from memory. The difficulties the band endured in Nigeria paid off; Band on the Run triumphed critically and commercially. It sold seven million copies, topped the United States album chart three times, and won a Grammy.

The Paul McCartney Archive Collection is a musical reissue program that uses the classic material from the celebrated career of Paul McCartney. The 2010 re-release of Wings’ iconic album Band on the Run is their first mission. The re-release is available in several different versions. This review discusses the three disc (2 CD, 1 DVD) Special Edition version featuring nine bonus audio tracks, rare footage of the McCartneys in Lagos, behind-the-scene clips from the famous album cover shoot, original Band on the Run promotional video clips, and the “One Hand Clapping” television special.

CD 1: The original Band on the Run re-mastered album

The DVD contains almost an hour and a half of music videos, behind-the-scene clips, promotional material, and documentary material. The videos include:

The promotional videos and music videos are the original versions from the 1970s. “Wings in Lagos” is a video set to an alternative version of the song “Band on the Run.” It is a black and white video of the band spending the day with the locals. “Osterley Park” is a behind-the-scenes video about the album cover photo shoot with all the participants. “One Hand Clapping” is a documentary television special from 1974. The special is a recording from the Abbey Road Studios in 1974. Some of the songs from the special are included on the second disc of this collection. The quality of the videos varies from bad to worse. These are the original copies from the 1970s. Expect to see a fair amount of damage in the form of scratches, grain noise, and dirt! I think the damage to the video quality is largely due to the age of the video clips. The colors are beyond repair, and have a slight gray tint.

The quality of the bonus material is far from average. However, fans are ignoring the quality and focusing on the quantity. There is a lot of fascinating material for a fan to absorb. The quality of the re-mastered Band on the Run album is amazing. For a Wings or Paul McCartney fan, this is an excellent collection to own!