Posted in: Random Fun by Gino Sassani on February 27th, 2011

This week we’re going to be celebrating the Walt Disney release of Bambi in high defintion. The Blu-ray comes out Tuesday March 1st. Our review will be out a week later. But we don’t want you to miss out on all of the fun. With the help of our friends at Disney, we’re going to offer a few Bambi posts this week.

Let’s start with a great deal from Disney themselves. You can go online and get a coupon for $10 off this amazing release right now. Just bang it here: Bambi Discout Coupon 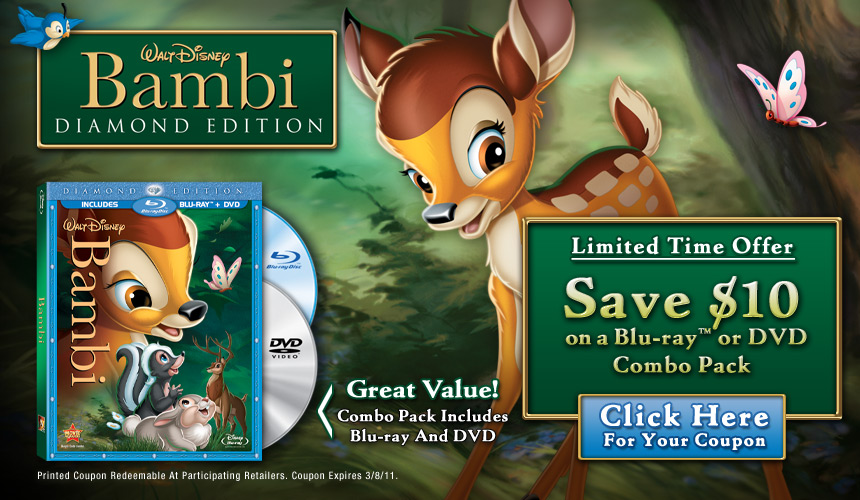 Bring this classic home to your family now and save enough dough for the popcorn.

Gino Sassani is a member of the Southeastern Film Critic's Association (SEFCA). He is a film and television critic based in Tampa, Florida. He's also the Senior Editor here at Upcomingdiscs. Gino started reviewing films in the early 1990's as a segment of his local television show Focus. He's an award-winning recording artist for Omega Records. Gino is currently working on his 8th album Merchants & Mercenaries. Gino took over Upcomingdiscs Dec 1, 2008. He works out of a home theater he calls The Reel World. Favorite films: The Godfather, The Godfather Part II, The Body Snatcher (Val Lewton film with Karloff and Lugosi, not the pod people film), Unforgiven, Gladiator, The Lion King, Jaws, Son Of Frankenstein, The Good, The Bad And The Ugly, and Monsters, Inc.
Riot Chaplin (15th Anniversary Edition) (Blu-ray)