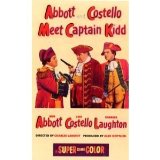 Bud Abbott and Lou Costello began their career completely by accident. Bud Abbott had tried his hand at doing the straight-man bit with limited success. One night in 1931 he was working as a cashier for a vaudeville company when Lou Costello’s partner came down with an illness. The performer needed a stand-in, and Bud Abbott filled in for the night. It was a temporary gig, to be sure. A temporary gig that happened to last 25 years. The two continued to work together on stage. While the team certainly reused a ton of the classic routines of the era, there was something unique and clever about the duo. The natural way in which they fell into each other’s lines was a rare sight, indeed. They eventually stood out for their ingenious word play, culminating in one of the most famous comic routines in history, Who’s On First.

The pair next took their act to the airwaves — radio airwaves, that is. They became a staple in the medium and eventually the highest paid performers in that industry. Films weren’t really much of an option at first. They were still mostly silent, and while comedy thrived in that era, Abbott and Costello’s brand of humor just would not have worked. But when sound became more economical and standard, the boys were thrown into the pictures. In 1940 they would star in a film called One Night In The Tropics. They would continue to make films for the next 14 years at an incredible pace. They made several films a year and were soon financing Universal studios with their output and box office income. Perhaps their most famous films were the monsters movies where Universal teamed their new moneymaker with the one before. In Abbott And Costello Meet Frankenstein, Bela Lugosi and Lon Chaney, Jr. would both reprise their famous Dracula and Wolf Man characters to the delight of fans of both franchises. Boris Karloff considered himself too old to don the heavy boots of the titular monster, which was played by Glenn Strange, who had performed the role in both House films. So he was still a legitimate part of the horror film cycle. The boys would get their chance to face Karloff later, not once, but twice.

Lesser known of the boys’ ventures was Abbott And Costello Meet Captain Kidd. That’s why it is such a pleasure to see that the film has found its way to the Warner Archive Collection. This is a special film from the duo. You might know that most of their films were with Universal. But the two were itching to do a film in color, and when they were going to do this film with Charles Laughton they went to Warner who was willing to shell out the cash to make it happen. Unfortunately, it would not be one of the team’s biggest success stories.

The story is a typical Abbott and Costello mix-up. The boys accidentally end up with a treasure map and get shanghaied by a couple of pirates played by Charles Laughton and Abbott and Costello favorite Hillary Brooke. They get taken on a high-seas misadventure that will be fun for all. Laughton does a splendid send-up of his own Captain Bligh character from Mutiny On The Bounty. He also played the same character of Captain Kidd in an earlier serious film that bombed. Now he got to play it for laughs, and it was one of his few humorous attempts. I’m actually more than a little surprised to see how much romp Laughton was willing to do. These pirates might not be from Penzance, but they do offer up a few musical numbers. It’s a common element in Abbott and Costello films. It’s all harmless fun with a few of the team’s stock-and-trade physical routines. The price is right, and Warner Archive has given you a welcome chance to catch this rare treasure and you didn’t even need a shovel. “Prepare to set sail.”

For more details and a chance to order the movie, Bang it here: Warner Archives

Gino Sassani is a member of the Southeastern Film Critic's Association (SEFCA). He is a film and television critic based in Tampa, Florida. He's also the Senior Editor here at Upcomingdiscs. Gino started reviewing films in the early 1990's as a segment of his local television show Focus. He's an award-winning recording artist for Omega Records. Gino is currently working on his 8th album Merchants & Mercenaries. Gino took over Upcomingdiscs Dec 1, 2008. He works out of a home theater he calls The Reel World. Favorite films: The Godfather, The Godfather Part II, The Body Snatcher (Val Lewton film with Karloff and Lugosi, not the pod people film), Unforgiven, Gladiator, The Lion King, Jaws, Son Of Frankenstein, The Good, The Bad And The Ugly, and Monsters, Inc.
Devolved Life Unexpected: The Complete First and Second Seasons