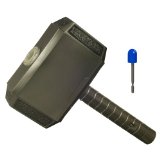 Today we begin a new feature here at Upcomingdiscs.

From time to time we are invited to take a sneak peak at some of the movies that are about to make their box office debuts. They are not coming out on home theater release… just yet. You can count on them truly being Upcomingdiscs. The new series of articles will be called The Reel World. They may include several new films in one piece or focus on one particular release. With a summer filled with potential blockbusters, we decided this was the time to roll out the new feature. What better way to kick the whole thing off than with one of this summer’s most anticipated films: Thor.

Marvel has rolled out some rather ambitious plans for the next two years. Of course, it has all been leading to the huge Avengers film coming summer of 2012. If you’ve been watching the scenes after the credits of both Iron Man films, you’ve already seen the groundwork has been laid. Now comes Thor, and we’re talking more than just groundwork here. This is the first in a series of films that lead directly to The Avengers.

Thor (Hemsworth) is one of two sons of Odin (Hopkins), the other being his younger brother Loki (Hiddleston). There has been quite a reign of peace on their world Asgard, of late. Thor is about to be crowned the new King of Asgard. What should be the beginning of a great time in his life leads to a rather long string of unfortunate events. Just as the crown is to be put on his head an alarm sounds. The Ice Giants have broken into a secure chamber to steal the source of their power. That vessel has been kept under constant guard since the day it was taken at the conclusion of a bloody war between the worlds. Now after years of quiet they have returned to break the peace. Not yet King, Thor wishes to attack the world for the attempt, but Odin has forbidden any action to be taken. But Thor believes he must act to protect his world and journeys to their planet to confront the race. It ends badly, and the warriors are whisked home just as they are to be killed. For his disobedience, Thor is banished to Earth without the ability to use his mighty hammer.

On Earth, things aren’t getting off to a good start for the now-mortal Thor. He’s hit by a van driven by scientist Jane Foster (Portman) … twice. He’s tasered and locked down in a mental ward. But as Foster and her team continue to investigate their encounter with Thor, they uncover evidence of a wormhole, which serves as the bridge between the worlds. Together they end up fighting a threat to Earth caused by the devious intrigue of brother Loki. Thor must find a way to save both worlds.

I was always a bit wary of this movie. Unlike the other Marvel comic heroes, Thor has a mythical background that doesn’t always fit quite so neatly in our “real” world setting. I was unsure how they were going to be able to tie these worlds together and keep the whole thing believable. Give director Kenneth Branagh some serious credit for making the transition between the worlds as seamless as he has done here. They coexist in the same universe with such a natural balance that I bought it all almost instantly. It was by far the biggest obstacle facing the movie, and it has become, perhaps, its biggest asset. The world of Asgard looks wonderfully mythic yet otherworldly, just as it should. It was a great stroke to cast Anthony Hopkins as Odin. The actor brings a more down-to-earth substance to the place, and the characters are all strong enough to keep it all grounded in some semblance of reality.

The cast is absolutely wonderful. You could not have asked for a better Thor than Chris Hemsworth. He brings a sense of humanity to the character that stands out. He’s the most natural casting for a hero since Downey filled the suit of Iron Man. He’s surrounded by a strong supporting cast. Rome fans will love seeing Pullo himself Ray Stevenson as Volstagg, one of Thor’s friends and fellow warriors. Jaimie Alexander is really a smart choice in the underused part of Sif. She’s another of Thor’s Asgard team and could handle a film of her own, I believe.

More down to earth, Natalie Portman is not bad at all as Jane Foster. I have to admit I’ve never been that impressed with her acting chops, and she’s not going to steal any scenes here, but there is a charm to her character that I haven’t seen before. Kat Dennings plays her sister-like helper Darcy. She’s the comic relief here, but not overtly so. Foster’s team is rounded out by a strong performance by Stellan Skarsgard as her mentor and friend Professor Erik Selvig. He’s the anchor of that team.

I saw the film in 3D, and it looks good. This isn’t a gimmick 3D film. Don’t look for sight gags and the like. It comes off natural enough, and I don’t know that you’ll lose a ton if you have to catch it in a normal theater.

What you want to know is how this leads to The Avengers. I won’t reveal any spoilers here, but that film is always in the forefront here. The agents of S.H.I.E.L.D. are ever-present. They capture Thor’s hammer and interfere with Foster’s team. No, Samuel Jackson isn’t in the film, not exactly. Make sure you stay for after the credits if you want to see him and the villain for The Avengers movie. Other members of the hero team are referenced in throwaway lines. We learn that a certain gamma ray expert scientist has disappeared and believed captured by S.H.I.E.L.D. Stark’s name comes up, and if you are paying attention you will catch the alter-ego of Hawkeye. If this is any indication of the quality and attention to detail we expect going forward, we’re in for one hell of a sweet ride. Next up it’s Captain America: The First Avenger. “The answers you seek shall be yours.”

Gino Sassani is a member of the Southeastern Film Critic's Association (SEFCA). He is a film and television critic based in Tampa, Florida. He's also the Senior Editor here at Upcomingdiscs. Gino started reviewing films in the early 1990's as a segment of his local television show Focus. He's an award-winning recording artist for Omega Records. Gino is currently working on his 8th album Merchants & Mercenaries. Gino took over Upcomingdiscs Dec 1, 2008. He works out of a home theater he calls The Reel World. Favorite films: The Godfather, The Godfather Part II, The Body Snatcher (Val Lewton film with Karloff and Lugosi, not the pod people film), Unforgiven, Gladiator, The Lion King, Jaws, Son Of Frankenstein, The Good, The Bad And The Ugly, and Monsters, Inc.
The Terror (Blu-Ray) Boy Meets World – The Complete Fifth Season