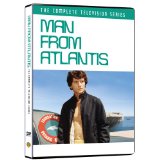 I have a lot of fond memories of this show from back when it first appeared in the mid-1970’s. And while the series didn’t last very long at all, it seems to have left a pretty strong impression on me as a child. My mother was a huge Dallas fan, and I remember the first time I had seen the show, and there was Patrick Duffy with body hair, and I knew that The Man From Atlantis had gone on his final mission. You see, the show was left up in the air for a considerable amount of time. There was no internet to get the latest entertainment news, and word of an official cancellation had not yet reached my ears. I wasn’t too concerned that the show hadn’t been on for a while; after all, that’s pretty much been the story of this science fiction show from its inception.

The concept began as a series of television movies. Patrick Duffy starred as Mark Harris. He was found washed up on a beach following a terrible storm. Rushed to the hospital, his condition continued to deteriorate to the complete mystification of the medical staff. Fortunately for Mark, and fans of the show, Dr. Elizabeth Merrill, played by Belinda Montgomery, happens to be attending a party with the hospital’s chief doctor. She tags along and recognizes something about the man no one else appeared to get. He has webbed hands and feet and a set of gills where his lungs ought to have been. She rushes him back to the ocean and brings him back to life. Mark can survive out of water, but only for a few hours at a time before he would again be close to death. It’s an envelope that seems to be pushed at least once per episode. He was weaker on land, but in the water he was super-strong. He swam like a dolphin, only faster, and could see spectrums of light and hear sounds that ordinary humans could not.

The two become friends, and Mark is recruited by the government to find a lost sub. The mission would put him face to face with the show’s major bad guy Shubert, played by Victor Buono with the same camp that he once threatened Adam West’s Batman as King Tut. Schubert has captured a collection of the world’s top scientists, and with the help of a bracelet that controls their minds he has them under his spell. Of course, Mark is immune to the device and saves the day. Shubert would return again and again with his plots for world domination.

The institute that the team forms would be run by C.W., played by Alan Fudge. He was the Oscar Goldman character and assigned the team their missions and usually complained about how much money they were spending. The team apparently confiscated Schubert’s sub and lair, because it would all become part of the group’s operations.

The first year saw four television movies that included alien invaders, killer spores, and kidnappers, the show got full series status in its second year. Unfortunately, the show only lasted 13 episodes before it disappeared as effectively as Atlantis itself. There had been talk of the possibility of at least more movies, but when Duffy showed up on Dallas, the huge success of that show meant a complete end for Mark Harris.

Leave it to Warner and their Archive Collection to bring Mark Harris back from a watery grave. This is an exceptional release from the program. Yes, the series absolutely showed its age as I watched it, no longer a young boy. It’s not near as good as I remembered it, but isn’t that the case with most nostalgia? The fact that it’s finally made it home is a bit of a victory, and I’ll bet there are still plenty of you out there who remember the show fondly and hoped for DVD releases. We have to be a little honest with ourselves and realize that the show just doesn’t have the commercial legs to warrant such a release. This is truly the best we can do, and I urge you to check it out before it’s too late.

There are two sets here. The first contains the four television movies, and the second contains the 13-episode series. There’s no clean-up, and you really can’t expect it. But the episodes are uncut for the first time since 1977. It’s a win for us and a win for Warner. When it comes to this collection, “I say yes to you.”

Find out more about this release from Warner. Bang it here to check it out: Man From Atlantis

Gino Sassani is a member of the Southeastern Film Critic's Association (SEFCA). He is a film and television critic based in Tampa, Florida. He's also the Senior Editor here at Upcomingdiscs. Gino started reviewing films in the early 1990's as a segment of his local television show Focus. He's an award-winning recording artist for Omega Records. Gino is currently working on his 8th album Merchants & Mercenaries. Gino took over Upcomingdiscs Dec 1, 2008. He works out of a home theater he calls The Reel World. Favorite films: The Godfather, The Godfather Part II, The Body Snatcher (Val Lewton film with Karloff and Lugosi, not the pod people film), Unforgiven, Gladiator, The Lion King, Jaws, Son Of Frankenstein, The Good, The Bad And The Ugly, and Monsters, Inc.
A Guy Thing (Blu-Ray) Scream of the Banshee