Posted in: No Huddle by Brent Lorentson on April 6th, 2012 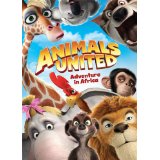 To just look at the cover of this DVD you would expect this would be your average run-of-the-mill talking animal kids’ film.  Instead Animals United comes off as a call to arms for children to save the planet before it is too late.  I could say how this movie suffers from having a weak script filled with the same characters we’ve seen from dozens of children’s films before, but that would just be too easy.  Instead I want to praise this film, for while it lacked originality I appreciate the boldness of the message they are trying to send.

The film introduces us to several animals spread out across the globe and how their environment is simply being destroyed around them.  There is a polar bear that falls through the ice as the ice shelves crumble around him.  A pair of turtles need to flee their home after a tanker crashes spilling oil onto the shores of their island.  A kangaroo and Tasmanian devil barely escape a brush fire started from a biker’s disregard for his trash.   The main focus of the story revolves around a family of meerkats in desperate need of water after all the water in the savannah has seemed to have dried up.  We meet them all in the opening minutes of the film, and already I was depressed and felt the need to recycle more.

As the story progresses,  somehow all the animals manage to all meet up in Africa and discover that the water has been stolen by humans for a luxurious resort.  The film makers enjoy a little irony throughout as there are reporters constantly doing reports from environmental summits with politicians who proclaim to care but at the same time have giant SUVs, litter, and have a conference at the resort in the savannah.  Hijinks of course ensue when the animals meet up with the humans, and all seems to be OK till the resort’s security officer, a big game hunter, sees the animals and sets out to rid the resort of its unwelcome guests.

The film was produced in Germany but has a British cast filling out most of the voice talent.  The detail is not as rich as you would find in a Pixar film, but still there are some well-animated scenes throughout.  I would imagine kids would enjoy this, though I’m sure some older viewers may roll their eyes at some points, but again I think it’s the message that matters most.  I think there are some kids that will be affected by this, especially a key scene involving a lion that is killed by the big game hunter.  I doubt it will bring kids to tears  like Bambi, but I believe it will open the eyes of some young viewers and possibly motivate them to get involved with the environment.  I think this is a great film for kids, and it is something the whole family can watch without feeling like a chore; hopefully I’m not alone in this.

Brent Lorentson is a horror writer and film critic based out of Tampa, Florida. With a BA in Digital Film, he co-wrote and co-directed Scavenger Hunt. His short stories have appeared in various horror anthologies. In 2019 his short script Fertile Blood will be a part of the anthology horror film Slumber Party. He is currently working on his first novel A Dark and Secret Place set to be released in late 2019. Favorite Films: Taxi Driver, Fight Club, I Saw the Devil, The Wild Bunch, Dawn of the Dead, A Clockwork Orange, Pulp Fiction, Heathers, The Monster Squad, and High Fidelity.
Real Adventures of Johnny Quest: Season One, Volume Two The Killing: The Complete First Season (Blu-ray)