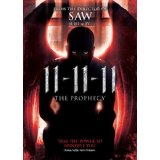 “What does it say about me that I find it much easier to believe in the Devil than I do in God?”

Coming off the Saw franchise, Director Darren Lynn Bousman brings us 11-11-11, a lame attempt at an atmospheric thriller in the vein of The Omen, Rosemary’s Baby and The Devil’s Rain.  I can only think the film was rushed into production to cash in on a once-in-a-lifetime date phenomenon. It certainly shows in the stiff acting and lo-fi production values.

“Successful author” (this term is used so often one would think it is a job title) Joseph Crone (Timothy Gibbs) is still grieving the loss of his wife and son to a fire set by an obsessive fan of his books on the previous year’s November 11th. He has isolated himself from the world in his London apartment where each night at 11:11 pm he wakes from a recurring nightmare of their fiery deaths. While attending a grief support group, he meets Sadie (Wendy Glenn) another fan of his books, whose awkward attempts to bond with him come across more than a bit stalkerish, but she does save him from a car accident that takes place at… wait for it… 11:11 am.

A call from his estranged brother, Samuel Crone (Michael Landes), alerting him to the impending death of his father (Denis Rafter) breaks him out of his funk and on November 7, 2011, Joseph returns to his family home in Barcelona to be there for his father’s final days. Turns out Samuel and Dad were both ministers of an avant garde faith losing parishioners due to their unorthodox dogma. Seems they are teaching to embrace sin and the human experience, a doctrine they believe is “transcending the world’s conception of religion.”

Samuel has lost faith, but as weirder and weirder things start happening at 11:11 am and pm he begins to investigate the spiritual implications. He discovers there is a large online community following the 11-11-11 phenomena called Eleveners. Seems on that date mysterious angelic beings called “Midways” will enter our world for some unknown purpose, as explained in one of the many clunky bits of exposition, “On the eleventh day of the eleventh moon of the eleventh year a gateway will open, and with it comes beings unlike mortal eyes have seen. And on this day blood will spill. And from this sacrifice the serpent will rise, destroying faith and bringing with it rapture, a sacrifice to reason, and a sacrifice to bring the end.”

These “beings unlike mortal eyes have seen” are men in black robes wearing obvious latex masks. The movie is devoid of any suspense or tension. There are a couple creepy moments involving his father, an actor scary without the need of makeup, and apparitions of his burned son. Other than that, the movie remains clichéd and predictable, as well as laden with long bouts of boring exposition. Characters routinely behave in confounding and inconsistent ways. For example, convinced he must protect his brother Samuel from the Midways’ attempts on his life, Joseph goes out to a park maze for no apparent reason and leaves his brother home alone. Also, if a stalker fan killed your family, would you embrace another stalker fan like Sadie, even though she traveled out of country, uninvited, to follow you?  And if you don’t see the twist ending a mile away, you weren’t paying attention. Even the limited shelf life of the date itself destroys any semblance of impending doom, as the DVD was released well over five months after 11-11-11.