A Bag of Hammers (Blu-ray) 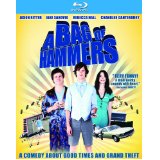 With technology constantly evolving and becoming more affordable, it has allowed more and more film makers to get their projects made.  With so many films now filling the market it’s become harder to sort through the crowd and find the ones that actually stand out from the pack, and because of this some really good films just get lost among the masses.  A Bag of Hammers seems to be one of those films.  This isn’t groundbreaking cinema, but it’s a story that has us look at the idea of what family is from a unique perspective without beating the message into our head.

Allen (Jason Sandvig) and Ben (Jason Ritter) have been best friends for years who are also a pair of bumbling grafters that want nothing more than to go through their lives having to do as little as possible.  At first this slacker comedy seems like something we’ve already seen before, but the lead characters are charming enough to keep you watching.  It’s when Lynette (True Blood’s Carrie Preston) and her 12-year-old son Kelsey (Chandler Canterbury) come into the story that things start to shift directions.  Lynette and her son have recently moved to Burbank to try to make a new start with their lives, but with a weak resume and lacking any office skills, getting a job is becoming a bleak and impossible task.  She’s trying to be a good mothe,r but nothing seems to pan out, as the bills pile up and it becomes more difficult to keep their refrigerator stocked with food.  But still Kelsey does what he can and doesn’t complain, because for him all that matters is having his mother around.

Allen and Ben haven’t had it easy in life, and though they see what is going on with their neighbors, they sit back and observe.  They get by with their da- to-day scam of posing as valet workers and stealing cars after being given the keys, their easiest targets being mourners that are attending funerals for loved ones.  The only time the issue of right or wrong in what they are doing comes up is when they go to the diner and see Allen’s sister Mel (Rebecca Hall from Vicky Christina Barcelona).  Mel has the burden of being the moral compass of the film, and when the tough decisions need to be made, she is the one who takes action.  She loves her brother; he’s all she has, and he helps support her going through school by giving her money when he can; she’s stuck as a waitress and needs the money.

It’s after Allen and Ben find Lynette dead in the garage after killing herself that the movie becomes a little contrived.  Either you’ll go along with the story and let it unfold or you will pigeonhole how impossible the rest of the story is so that the point of the film may be missed.  Instead of letting social services take care of Kelsey where he will be placed in a home or become a ward of the state, Allen and Ben decide that they should raise Kelsey.  To do this, before calling the police and reporting the death, they wipe the home clean of any evidence Kelsey was living with his mother.  The guys are well intentioned since they see themselves in the young boy, and they figure if they turned out okay then they could easily do better raising Kelsey than the state could.

The guys do their best at making a go at being parents, and when you get to see Kelsey happy with them it’s hard to not want this to work out for them all, but of course things can’t be that easy considering the two are both con men.  With the most poignant scene later being  a montage of the life that could be between Allan, Ben, and Kelsey, it’s hard to not want to root for these guys to work out their issues so they can be the parents they could be.

The chemistry of all the actors is what really anchors this film.  Whether it’s the bantering between Allan and Ben or watching the interaction when the guys are with Kelsey, the relationships between the characters always felt genuine.  The oddball of the bunch was the casting of Amanda Seyfried as Ben’s ex-girlfriend; the role didn’t do anything for the story but put a familiar face on the screen for a few minutes.  Aside from this minor misstep I felt the script worked nicely, finding a right balance between this being a comedy and a fair dose of darkness.  For those that are fans of Wes Anderson and talking head films, I think this film is for you.

This is a nice little indie film that I’m really glad to have had the chance to review, because otherwise I don’t think I ever would have seen this.  I wouldn’t say this is the greatest story ever told, but it’s nice to see that there are good scripts still being written that aren’t dependent on special effects or a big budget to tell the story.  This was a solid cast and a good first attempt for Crano as a director, and I hope to see more from all those involved.

Brent Lorentson is a horror writer and film critic based out of Tampa, Florida. With a BA in Digital Film, he co-wrote and co-directed Scavenger Hunt. His short stories have appeared in various horror anthologies. In 2019 his short script Fertile Blood will be a part of the anthology horror film Slumber Party. He is currently working on his first novel A Dark and Secret Place set to be released in late 2019. Favorite Films: Taxi Driver, Fight Club, I Saw the Devil, The Wild Bunch, Dawn of the Dead, A Clockwork Orange, Pulp Fiction, Heathers, The Monster Squad, and High Fidelity.
Contest: Two Lifetime Moves – The Bling Ring & Girl Fight Seeking a Friend for the End of the World