Posted in: No Huddle by Brent Lorentson on August 17th, 2012 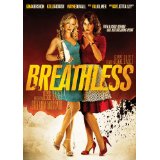 “I guess I kinda always liked cutting stuff up.”

Maybe it’s a little weird to admit this, but I dig movies where the characters are put in the position where they need to dispose of a body.  This is something of a sub-genre plot device that worked so well in Shallow Grave as well as Very Bad Things.  Sure, most of us would go ahead and call the police and report the body or the accidental homicide, but I always found these films amusing when they decide to let their characters do the wrong thing.  In the case of Breathless we get to see how far a jilted housewife is willing to go to keep the 100 thousand dollars her husband robbed from a neighboring town’s bank.  It’s a dark comedy and not for the squeamish, but it’s a fun ride with only a few hiccups that keep this from reaching its full potential.

After I first saw the cast I was a little concerned when I saw Val Kilmer’s name attached; I’m a big fan of the guy, but lately he just hasn’t been in much worth even remembering.  But the role of Dale, a blundering thief and cheating husband, is something he seems to have some fun with.  It’s a small but pivotal role that won’t exactly rake him in any awards, but it was good to see him putting in the effort here, and he’s quite amusing when he’s on screen.  But this movie belongs to Gina Gershon in the role of Dale’s wife Lorna.  She can play the part of the southern housewife full of charm and class, but when she gets to show her bad side, this is a woman you do not want to mess with.

Once you get past the opening credits which any fan of Showtime’s Dexter will recognize; the film wastes no time getting the plot moving.  After a brief interrogation by Lorna and her best friend Tiny (Kelli Giddish) it’s during this time Lorna manages to accidently shoot Dale in the head, instantly killing him, spraying brain matter everywhere.  Unfortunately for the women, not only do they have a dead body to deal with, but with Dale deceased they lose their chance to hear where he stashed the money.  They tear the trailer apart but come up empty-handed, and things get worse for the ladies after the Sheriff (Ray Liotta) stops by for a visit to question Dale about the heist.  With some clever evasiveness Lorna manages to hold the Sheriff off till he can return to the home with a search warrant leaving them only a few hours to figure out how to get rid of the body.

What follows the rest of way gets messy and complicated as we discover both women know more than the other is letting on.  Sure, the dialog is a bit over the top and awful at some points, but Gershon and Giddish play off one another so well here that they make the outlandish dialog work.

If there was any complaint that bothered me here, it would be the introduction of a private investigator (Wayne Duvall) who shows up hoping to get a piece of the action.  I understand him being added to bring more conflict between the women, but to put it bluntly, I hated this character.  The acting was fine, but I just hated the character even being a part of this story and getting in the way of seeing Lorna and Tiny bicker.

When it comes to the ending I feel a little cheated; it’s not bad, but it just felt a little safe.  I won’t get into any details, but it simply bothered me that they chose to go this route, because common sense would tell me this would not work out.  Sure, it’s a movie I shouldn’t be thinking with real world rules, but I couldn’t help but feel the filmmakers cheated their characters and took the easy way out and ignored logic.

Aside from a few nitpicks I really liked this one; it’s not a classic by any stretch of the imagination, but it’s a fun little movie .  This would make a fun midnight double feature with Bound if anyone was up for some double Gershon goodness.

Brent Lorentson is a horror writer and film critic based out of Tampa, Florida. With a BA in Digital Film, he co-wrote and co-directed Scavenger Hunt. His short stories have appeared in various horror anthologies. In 2019 his short script Fertile Blood will be a part of the anthology horror film Slumber Party. He is currently working on his first novel A Dark and Secret Place set to be released in late 2019. Favorite Films: Taxi Driver, Fight Club, I Saw the Devil, The Wild Bunch, Dawn of the Dead, A Clockwork Orange, Pulp Fiction, Heathers, The Monster Squad, and High Fidelity.
Girls Gone Dead (Unrated and Exposed Edition) Contest: Win 10 Things You Don’t Know About From A&E/History