Posted in: No Huddle by Brent Lorentson on August 23rd, 2012 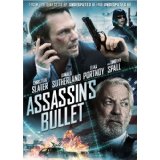 As the credits rolled for this film I struggled to remember the last time I’ve been so relieved that a movie had finally come to an end.  Christian Slater and Donald Sutherland are so much better than this. Can things really be so bad that they are slumming to do this “D” grade action nonsense?  I understand a gig is a gig, but these guys used to be at least marketable names to the box office.  They still have the talent and swagger to steal a scene, so why subject them to this?  Before I digress any further, allow me to take a breath…

Assassin’s Bullet is an action film about a female vigilante who is out to kill several members of a terrorist organization.  The assassin is haunted by her past after she witnessed her parents being murdered by a suicide bomber.  Sure, witnessing something as severe as this is enough to make anyone want blood, but the thing is, she doesn’t even remember what all happened that day because her memories are all repressed.  With the vigilante responsible for so many bodies piling up Robert (Slater), a former FBI agent, is brought in to hunt down the vigilante and discover who they are working for.  Slater just doesn’t seem into this role at all as he coasts with his charm but brings nothing more to the role.  For a character that is still in love with his wife after she died a few years prior, it doesn’t take much to distract him.

When Robert is not busy with work, he frequents this belly-dancing joint with his friend Dr. Kahn (Timothy Spall) who is a shrink who is treating Vicky, a teacher who is having problems remembering what happened to her family but recalls being locked away in a military ran facility. One night Robert sees a woman perform on stage, and he is smitten with her and can’t help but want to get to know more about this mysterious belly dancer, and the two begin to develop a relationship.  The relationship aspect between Robert and the belly dancer is just about the only thing that sort of works here, but this is supposed to be an action movie; bring out the guns, not cuddling.

Visually this film is a mess; where it tries to show style it comes in the form of a jerky zoom that happens far too often.  When the action sequences come along it couldn’t feel more boring.  They don’t even try to give us something new or even give the picture some style.  If this was a first time director maybe some things can be forgiven, but Isaac Florentine actually has quite a few films on his resume.

I wish there was something positive to say about this film, but there isn’t.  This is an instance where I watched this film so you won’t have to.  Granted this is only my opinion, and who knows, there may be a market out there for those who like multiple-personality, belly-dancing  assassin films, but let me just say the description is far more entertaining than the outcome we see here.

Brent Lorentson is a horror writer and film critic based out of Tampa, Florida. With a BA in Digital Film, he co-wrote and co-directed Scavenger Hunt. His short stories have appeared in various horror anthologies. In 2019 his short script Fertile Blood will be a part of the anthology horror film Slumber Party. He is currently working on his first novel A Dark and Secret Place set to be released in late 2019. Favorite Films: Taxi Driver, Fight Club, I Saw the Devil, The Wild Bunch, Dawn of the Dead, A Clockwork Orange, Pulp Fiction, Heathers, The Monster Squad, and High Fidelity.
Hit and Run Premium Rush