Posted in: No Huddle by Brent Lorentson on August 29th, 2012 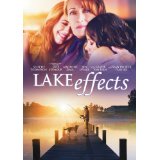 It’s not often, if ever that you’ll find me looking forward to a Hallmark Channel movie.  I have nothing against a good romance or sappy family dramas; it’s just that guys for the most part are not the target demographic.  To get to the point, this film is the chick flick guys fear being made to watch after losing the battle at the Red Box when all the other appealing titles are out and the wife or girlfriend is in no mood for action.  But thankfully the film isn’t all bad, and in fact it’s actually decent with the exception of a few clichés along the way.

Vivian (Jane Seymour) and Ray (Jeff Fahey) are living the dream after 30-plus years of marriage and still happily in love.  Together they live along the shore of Smith Mountain Lake where they have built the home of their dreams.  Everything is great till one morning Ray sets off to go fishing and ends up blowing himself up when trying to grill some fish along the shore.  This devastates the small town and the family, causing Sara (Scottie Thompson) to return to Virginia while she is in the middle of a making a deal that is sure to make her partner at her law firm in Los Angeles.  It’s been years since Sara has been back, but nothing has changed but her.  With Lily (Madeline Zima), her younger sister, Sara does what she can to get through the funeral as fast as she can so she can return to LA and make partner.  Of course Lily can’t understand why Sara always resented living in the small town, and Vivian feels nothing more than an inconvenience to her daughter ,so of course grief and tension bring them to argue and then move on to tears.

Before Sara leaves to return to LA, she discovers her mom is about to lose the family home to a real estate company that is moving in to buy up properties around the lake.   While Sara is hard at work trying to figure out how to save her mom’s home, an old flame from that past, Tyler (Eyal Podell), is looking to rekindle their old relationship.  But Sara isn’t the only one dabbling with love as her sister Lily is being pursued by Carl (Ben Savage), who runs a group that is trying to find a lake monster the town has named Smithe.

The plot runs the same predictable course you would expect, and that is fine.  What makes this film work is how genuinely each actor plays their part.  The dialog is nothing amazing but gets the job done.  Where the film shines is when we get to see the sisters interact together.  Thompson and Zima have a nice chemistry together; it’s a shame they didn’t share more screen time.  Another positive for this film is how beautifully this film is shot.  It’s a TV movie, so usually we have to settle for somewhat bland cinematography, but that’s not the case here.  The filmmakers knew they had a beautiful local and they took full advantage, capturing beautiful landscape shots as well as some gorgeous sunsets throughout.

Where the movie falters is with all the relationships that are going on throughout the town.  There are so many sub-plots going on that it takes away from the heart of the story, which is about the love and bond of family being what truly matters.  We don’t need to know about the wine festival or about a TV crew wanting to film an episode about the lake monster; it just all becomes too much.

Overall though this isn’t a great love story, but it is sweet and has some nice moments, though it’s not one I’ll be remembering down the road.  Ladies, I’m sure you’ll enjoy this one much more than me, though I’ll admit I kind of liked it.

As a side note I found out that one of the writers had passed away not long after the completion of the film.  After reading about his passing it gave me a greater appreciation for the film, as I could see it as his farewell to his family.

Brent Lorentson is a horror writer and film critic based out of Tampa, Florida. With a BA in Digital Film, he co-wrote and co-directed Scavenger Hunt. His short stories have appeared in various horror anthologies. In 2019 his short script Fertile Blood will be a part of the anthology horror film Slumber Party. He is currently working on his first novel A Dark and Secret Place set to be released in late 2019. Favorite Films: Taxi Driver, Fight Club, I Saw the Devil, The Wild Bunch, Dawn of the Dead, A Clockwork Orange, Pulp Fiction, Heathers, The Monster Squad, and High Fidelity.
Lawless Hell