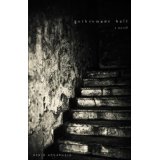 Faithful readers might remember the name David Annandale. He’s been a member of the Upcomingdisc family since it started. You may have also noticed he hasn’t been reviewing much of late. That’s because he’s busy getting his novels published. That’s right our man David is hitting the big time. We want you to check him out. So, here’s an excerpt from his exceptional horror book: Gethsemane Hall.

In the dream, he was back at St. Rose’s Church, going through the funeral again. He knew he was dreaming because he felt the pain of repetition, sensed the sadism of a force that would make him experience ritualized loss once again. Knowing that he was dreaming didn’t diminish the pain. The anguish pressed him down, a granite weight, as he tried to stand for the hymn. The injustice of the re-enactment was colossal and could only be for the benefit of a cruel deity’s amusement. Something was laughing at him. He looked up. Standing above the altar was a large wooden crucifix, its Christ bigger than life. The Christ was laughing at him. Now he was looking at the face in close-up, was staring into its wide mouth, could see where the red paint of its throat had chipped, saw lips peeled back from tree-ringed teeth. He couldn’t see Christ’s eyes. He couldn’t see anything but the laugh, the maw of red disappearing to black. The laugh itself was looking at him, the mouth so contorted with mirth that the very expression had become sentient. He tried to yell back at it, to give back his hatred, but the laugh was too huge, too strong, visible even when he closed his eyes. The laugh grew from howl to tsunami roar. Its register climbed hysteria’s ladder, from exultation to frenzy, and finally it was the scream of the heart of the universe.

Want to read more? Of course, you do. Pick up the book today and be sure to keep an extra light on when you’re finished reading. Don’t say we didn’t warn you.

Gino Sassani is a member of the Southeastern Film Critic's Association (SEFCA). He is a film and television critic based in Tampa, Florida. He's also the Senior Editor here at Upcomingdiscs. Gino started reviewing films in the early 1990's as a segment of his local television show Focus. He's an award-winning recording artist for Omega Records. Gino is currently working on his 8th album Merchants & Mercenaries. Gino took over Upcomingdiscs Dec 1, 2008. He works out of a home theater he calls The Reel World. Favorite films: The Godfather, The Godfather Part II, The Body Snatcher (Val Lewton film with Karloff and Lugosi, not the pod people film), Unforgiven, Gladiator, The Lion King, Jaws, Son Of Frankenstein, The Good, The Bad And The Ugly, and Monsters, Inc.
Touch – The Complete First Season Check It Out: Season 1 & 2