The Hobbit: An Unexpected Journey

Posted in: The Reel World by Gino Sassani on December 13th, 2012 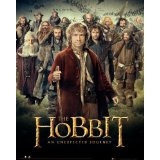 “My dear Frodo, you asked me once if I had told you everything there was to know about my adventures. Well, I can honestly say I’ve told you the truth, but I may not have told you all of it…”

It’s hard to believe that it’s been a decade since Peter Jackson last brought us to the fantastic lands of Middle Earth. It was one of Hollywood’s most ambitious projects ever. Jackson took on the perilous journey of adapting J.R.R. Tolkien’s famous Lord Of The Rings trilogy. Perilous because of the beloved place the works hold in the hearts of those who have read them over the years. There is such a wonderfully detailed world delivered by Tolkien that we already had very vivid ideas of these places and characters. To his credit, Jackson proved to be up to the task and delivered a trilogy that one can only describe as brilliant. The lands and people were just as I had envisioned them since I first encountered them in my own youth. Expanded versions hit the home video market, and about 12 hours of story has made it to our screens. And there it has sat for the better part of that decade.

When it was decided to go back to the well and relate the events of the earlier and more child-friendly book, The Hobbit, there were many obstacles to overcome. For one thing Peter Jackson was engaged in a lawsuit fight with New Line over his cut of the trilogy’s profits. Thanks to wonderful studio accounting it appears this multi-billion dollar franchise didn’t make any money after all, at least not when it came to paying Jackson his fair share. There was also the issue that the rights belonged to a different part of Tolkien’s estate and had to be negotiated all over again. Plans went forward without Jackson and Guillermo del Toro was signed to write and direct two films based on The Hobbit. Events would lead to del Toro’s exit and a settlement between Jackson and New Line. Suddenly the band was back together and the film project would eventually expand to another trilogy. The material would come not only from the book itself but other notes and unfinished manuscripts by Tolkien himself. The wait was over, and the new wait had begun.

Now that wait is also finally over and The Hobbit: An Unexpected Journey is ready for its traditional Christmas season release. The story is quite faithful to the original material with exceptional added pieces.

“In a hole in the ground there lived a hobbit. Not a nasty, dirty wet hole filled with the ends of worms and an oozy smell…”

Bilbo Baggins (Holm) is preparing for the birthday party that would kick off the events of the previous trilogy. He’s writing a memoir for his nephew Frodo (Wood). It sparks his memory back to a time when a younger he (Freeman) was first visited by Gandalf (McKellen) and invited to go on an adventure. The hobbit is, of course reluctant, for after all hobbits don’t go on adventures. His home is inundated by dwarves led by the would-be King Thorin (Armitage). It appears a mighty dragon had taken the kingdom of the dwarves many years ago and made a nest in their stores of gold. Orcs drove out what was left of the race, and the lineage of the king was pursued and beheaded by a strange pale orc. Now it’s time for this band of dwarves to reclaim their kingdom. With Bilbo’s help as a burglar, they intend to enter the mountain kingdom and release it from the dragon’s hold. Along the way there are many adventures to be found.

The journey takes them to the land of the Elves. They encounter trolls who wish to cook them. There are many battles to be fought, and Bilbo will encounter a strange creature named Gollum (Serkis) in a subterranean waterway. There he will come into possession of an important ring. The story isn’t over here, of course. There are still two more films to tell the entire tale. Next Christmas we’ll see The Desolation Of Smaug and the following summer will bring us the conclusion in the form of There And Back Again.

I had the chance to see the film on two occasions. The first was in a standard 24 frames per second format and the second in the controversial 48 frames per second. Both screenings were in 3D. There has been a lot said already about the experimental frame rate, and my feelings are decidedly mixed. There is no question that the new frame rate provides the sharpest and most stunning images I’ve ever seen on a screen before. I can’t really remember anything that comes close. It also enhances the 3D effect, which I found rather unnecessary when viewing in the 24fps. I still think I’d rather it not have been 3D, but the 48fps absolutely brought out depth that I did not see in the first viewing. It will take some getting used to at 48 fps in any case.

With that said, I’m not sure this was the film to use for this experiment. I was always hoping that the films would all match somewhat and eventually be viewed as one large canvas. This makes that absolutely impossible. The look is very much like that of a BBC video production. It’s also akin to watching your high-definition television with the auto motion plus turned up to high. Some people call it the Soap Opera Effect. Look. I’m not going to go into a rant about the good old days of film. I believe there is a time and a place to use all the new toys that technology offers. I’m a huge Pixar fan. I don’t rage about how hand-drawn animation is the only way to go. Still, I’m not convinced this is the way to go here. I actually recommend you see it in 24 fps, at least first. And here’s the really good part about the whole thing. It’s a movie you are going to want to see more than once anyway. Why not see it in both?

So, how about the film itself? So glad you asked. Jackson does a wonderful job of bringing you back to Middle Earth so that you feel like you’re returning home. The Shire is just as you remembered it. Sir Ian McKellen wears Gandalf’s gray as if he were born to it. Of course, he’s the glue that holds this together with the Rings trilogy. We see return cameos by Ian Holm as older Bilbo and Elijah Wood as Frodo. Hugo Weaving is back as Elrond, as is Cate Blanchett as Galadriel. Christopher Lee even makes a pivotal appearance as Saruman. The company of dwarves features many excellent performances. But it is the anticipated meeting between Bilbo and Gollum that reminds us why we came to see this film. It is in that moment that the smile never left my face and I was immersed totally into the story that was unfolding. It’s a sight to behold that ring when it first appears, and it will not disappoint at all. Martin Freeman is perfectly cast as the young Bilbo. He has enough common features that he becomes Bilbo in no time at all. He is the eyes and the ears of the viewer. Freeman exhibits such a cautious, yet light nature that we are willingly taken along for his most unexpected journey.

The characters are lovable. Yet, this traveling group is not as diverse. All are dwarves with the exception of Gandalf and Bilbo. That means there isn’t the same diversity in the interactions that made the earlier films more interesting. That isn’t to say this film isn’t as interesting. It’s just that the group itself doesn’t offer the same opportunity for the complex relationships. All of the actors are fine choices. I would not have expected Jackson to falter here. He’s already shown great talent in bringing together the perfect actors for their roles. The Hobbit is no exception. You will fall in love with these new characters. You’ll fall in love with the older ones all over again.

The set pieces are just as grand in both design and execution. You quickly believe that these places do indeed exist, and Jackson doesn’t waste your time forcing you to resettle into this world. While the film revisits many places from Rings there is an entire world of new places and creatures to delight you here. The Hall Of The Goblins is an exceptional environment marred only by a George Lucas-styled character that will remind you of the laughing puppet at Jabba’s side in Return Of The Jedi. The troll scene was a favorite of mine from the book, and it works here both on a serious and quite whimsical way. You will at once recognize this as the same Middle Earth you explored a decade ago. Even the new frame rate and 3D can’t take away the familiar surroundings of the earlier films.

Remember that The Hobbit was written for children. That doesn’t mean this is a Disney-like kid film. It’s most certainly not. It is, however, much lighter and full of more sight gags. There’s a dishwashing scene in the early going that looks like something out of Snow White and her very different set of dwarves. I’ve heard some complaint about the lighter nature, but not from anyone who understands the original material. These were very differently styled books. Yes, they are joined together by the ring, and that is absolutely the magical moment of the film. Credit Jackson for truly understanding his material and not bowing to the pressures to merely remake his previous films.

I’ve said it many times before: expectations are killers. No question they were high here. Add in the controversy over the frame rate issues and you have the potential for a quite unexpected flop. That’s not the story here at all. This is Middle Earth by the only man outside of Tolkien himself who can take you there, and that he does. Do I wish he’d have saved the experiment for another film? His upcoming Halo project would have been a perfect candidate. Yes, I would have preferred that scenario. It’s not what we got. Let’s enjoy what is here and forget about what isn’t. Fortunately, you can see the film in whatever way you desire. When the Blu-ray comes out there’ll be interesting things to see then. For now, “Home is now behind you. The world is ahead.”

Gino Sassani is a member of the Southeastern Film Critic's Association (SEFCA). He is a film and television critic based in Tampa, Florida. He's also the Senior Editor here at Upcomingdiscs. Gino started reviewing films in the early 1990's as a segment of his local television show Focus. He's an award-winning recording artist for Omega Records. Gino is currently working on his 8th album Merchants & Mercenaries. Gino took over Upcomingdiscs Dec 1, 2008. He works out of a home theater he calls The Reel World. Favorite films: The Godfather, The Godfather Part II, The Body Snatcher (Val Lewton film with Karloff and Lugosi, not the pod people film), Unforgiven, Gladiator, The Lion King, Jaws, Son Of Frankenstein, The Good, The Bad And The Ugly, and Monsters, Inc.
Holiday Gift Guide – Spotlight: Star Trek The Next Generation: Season 2 (Blu-ray) NBA 2K13 (Xbox 360)