Posted in: No Huddle by Jeremy Butler on December 17th, 2012 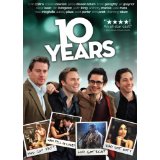 “Through the good times and the bad, you were the best I never had.”

Who became successful? Who completely changed? Who stayed the same? For all the questions that are asked at every 10 year high school reunion, 10 Years is dedicated to you. Equipped with a stellar cast of Hollywood’s next generation elite: Channing Tatum, Justin Long, Rosario Dawson, Kate Mara, Brian Geraghty, Ari Graynor, Kate Mara, Oscar Isaac, and the list goes on.

Former Prom King Jake (Tatum) returns home with girlfriend Jess (played by Tatum’s real life wife, Jenna Dewan-Tatum) for the first time in eight years. Though he lives within driving distance of his hometown, he never ventures home after the breakup with his ex-girlfriend and former Prom Queen Mary (Dawson), coming home only after hearing that Mary will not be attending their high school reunion. What will he do when Mary shows up unannounced?

Best friends and rivals Marty (Long) and AJ (Max Minghella) are reunited and quickly continue their rivalry, competing for the attention for the girl of their dreams back in high school (Lynn Collins). High school sweethearts Cully and Sam (Chris Pratt and Ari Graynor respectively) are now married with kids; Cully who was a bully back then hopes to make amends with some of the people he tormented in high school; however, one too many drinks may stand in the way of that. Finally, Reeves (Oscar Isaac) has been transformed from band geek to rock star with a number-one-chart-topping hit song and has returned home in hopes of finally telling the girl he wrote the song about how he feels.

Well, it’s not the insanity that was American Reunion, but this film is a star in its own right. Given the talent pool in this film, I have to be honest that I was surprised that it did not earn a wider theatrical release; then again, not everything that goes to theaters becomes a blockbuster, and I see no reason why 10 Years won’t be flying off the shelves despite its modest release.

The film’s strength is that it is rooted in the real life issues that people confront when they attend their high school reunion (though I can’t say with absolutely certainty because mine is still years off). Who doesn’t look back on their time high school, and think about how many things in their life have changed? Or how they are still the same after such a long passage of time?

Each member of the cast is used to playing the lead in their own respective films, but in 10 Years they all band together and share the spotlight, and that is something to be admired. Icing on the cake, this film has its own theme song sung by the one of the actors. Oscar Isaac’s rendition of his character number one song, “Never Had,” is a point in the film that you will want to watch over and over. (It’s obvious that he’s lip syncing in the film, but I did some digging on YouTube, it’s really his voice). To sum up, 10 Years is a good, hilariously entertaining film, and I only hope to have half as much fun at my high school reunion as the cast did here.

Jeremy Butler is a film school graduate of the International Academy of Design and Technology. He is been writing for Upcomingdiscs since 2012; however, movies have played a big part of his life for much longer. Favorite genres include horror, science fiction/fantasy, and comedy. Favorite movies are V for Vendetta, Boondocks Saints, Kiss Kiss Bang Bang, and The Godfather.
NBA 2K13 (Xbox 360) Law & Order: Criminal Intent: Year Nine