Posted in: No Huddle by Brent Lorentson on December 17th, 2012 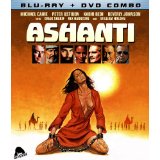 “Everywhere you’ll go you’ll hear that slavery is a thing of the past.  Don’t believe it.”

When I got handed this disc to review I didn’t pay it much attention till I noticed it had Michael Caine in it.  Then after a search on IMDB well I started to get more and more excited.  Filling out the rest of cast there’s Peter Ustinov (Spartacus), Omar Sharif (Lawrence of Arabia), and William Holden (The Wild Bunch) all together in an African adventure film directed by Richard Fleischer (Tora! Tora! Tora! and 20,000 Leagues Under the Sea) I couldn’t believe I had never seen, much less even heard of this film.  When we first meet Dr. David Linderby (Caine) and his wife Dr. Anansa Underby (Beverly Johnson) they have just arrived in a tiny African village where they have travelled to inoculate the villagers.  With their work done, David takes in a celebration that the tribe is performing; instead of staying to enjoy the ceremony Anansa (who happens to be a former native to an Ashanti tribe) decides to go for a swim.  It’s this fateful decision that leads to Anansa’s capture by a group of slave traders lead by Suleiman (Ustinov).  The film wastes no time putting Caine in pursuit of the slave traders.

Suleiman quickly discovers that he has in his possession more than just a simple village woman, but that she has connections with the United Nations and  she could be the big pay day he needs so he can finally retire.  The only hurdle is he must take all his slaves along a dangerous slave route that stretches beyond 3000 miles, and much of the trek is through the jungles and desert.  What makes Suleiman and his men so “evil” is not that they’re violent but how they view their slaves.  At one point during a break along their travels one of the men asks to take one of the boys for himself, Suleiman reluctantly agrees only asking that he not be harmed.  The result of the scene, though off screen, is enough to fuel hatred in even the most cynical of filmgoers.

The on-location footage adds so much to this film, from the thick jungles that seem nearly impossible to penetrate to the vast desert that seems equally as perilous.  To imagine slaves having to make this journey only to be sold off as worker slaves or potential sex slaves seems unimaginable that anyone would allow another human to endure, but this kind of trafficking of people exists to this day.  It’s this fact that allows this film to be timeless.  Though it was released in 1979, the film could be released now and people wouldn’t question the relevance of the plot.

The cast is what drives this picture from beginning to end.  Each actor is given a moment to shine; in the final act of the film when Linderby and Suleiman finally meet up is priceless, yet equally anti-climatic.  You want our hero to have revenge and see these evil men punished, but the reality is what good will it do?  In the end our hero is confronted with the choice to act in violence and go against all he believes or let a monster go to continue with his monstrous acts.  Had the movie been released now I believe its message would have been watered down in a story filled with excessive action sequences and less sympathy for characters involved in the slave trade.  (Yes, you read that right.)  There’s a subtle moment when a character who is holding slaves has not just the slaves taken from his possession but also his camels and his supplies.  He’s not a character who deserves any tears, but he’s a character who isn’t a villain but simply a survivor in a harsh world where he must do bad things in order to feed himself and his family.  It’s characters like this who litter the story, which give it the honesty it needs to equally be horrified by and sympathize with the situation happening in Africa.

With D’jango Unchained coming out in just a few weeks, this is the perfect movie to watch beforehand or after to get you into the proper exploitation mood.  I’m not saying this is a film near the caliber of Tarantino’s spaghetti western opus, but it’s a film cut from the same cloth with a stern message against slavery yet remains entertaining throughout.

Brent Lorentson is a horror writer and film critic based out of Tampa, Florida. With a BA in Digital Film, he co-wrote and co-directed Scavenger Hunt. His short stories have appeared in various horror anthologies. In 2019 his short script Fertile Blood will be a part of the anthology horror film Slumber Party. He is currently working on his first novel A Dark and Secret Place set to be released in late 2019. Favorite Films: Taxi Driver, Fight Club, I Saw the Devil, The Wild Bunch, Dawn of the Dead, A Clockwork Orange, Pulp Fiction, Heathers, The Monster Squad, and High Fidelity.
Law & Order: Criminal Intent: Year Nine Get the Christmas Blu’s with Oppo’s BDP-103