Posted in: The Reel World by Gino Sassani on January 4th, 2013 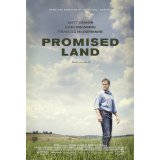 This is the time of the year when everyone is giving their lists for the best films and televisions shows for 2012. It’s become almost the “in” thing to do, and we’ve resisted following such a trend here. The lists are always going to be very subjective and have very little value except a little stirring of the pot. If pressed I could tell you what I thought were the best movies I’ve seen in 2012. Right now I’m going to tell you about a movie that would top my list of worst films I’ve seen in 2012. That distinction belongs to Promised Land. I hate films that are pretentious or preach. This does both and doesn’t even grant me the courtesy of pretending it’s entertaining at the same time. The story is about as predictable as a race between a Ferrari and a sautéed snail. Steve Butler (Damon) and his long-time partner Sue Thomason (McDormand) are the best at what they do. What they do is represent a natural gas company, and they go into untapped towns and buy fracking rights from land owners. The duo is known for getting the rights and getting them cheap. It’s all part of a familiar song and dance. The cash-poor landowners are reeled in with the promise of life-changing money. Of course, what really lies in their future is the eventual destruction of their town. They are welcomed with open arms until an old scientist now teaching high school science (Holbrook) brings up some disturbing questions. Matters get worse when Dustin Noble (Krasinski) rolls into town claiming to represent an environmental group that Butler’s never heard of before. The visit becomes confrontational, and the town is divided on the issue. Some still welcome the reps, while others want to run them out of town.

The story is certainly an interesting one even if it’s been played out too many times before. Promised Land comes with some twists and turns that I’m sure the filmmakers thought were clever and serve a necessary social function. There’s no question that the process of fracking has risks and is quite controversial. The film might have accomplished what it set out to do, which was to take a stand on the issue. Unfortunately, everyone here decides to overplay the hand, and the result is such a blatant message that all of the environmental messages are dulled by the attempt. Damon’s character has the kind if epiphany moment that borders on the absurd. It comes from nowhere at all, and Damon just doesn’t exhibit the acting chops here to bridge the credulity gap. There is another twist which would spoil the film more than the filmmakers have already done. But let me assure you that there are more than enough absolutely crazy plot twists here to make any reasonable audience groan.

My only regret is that I don’t have Matt Damon’s mailing address. I’d surely send him a bill for wasting nearly two hours of my life. I saw the film for free, and I want my money back. “What’s your price?”

Gino Sassani is a member of the Southeastern Film Critic's Association (SEFCA). He is a film and television critic based in Tampa, Florida. He's also the Senior Editor here at Upcomingdiscs. Gino started reviewing films in the early 1990's as a segment of his local television show Focus. He's an award-winning recording artist for Omega Records. Gino is currently working on his 8th album Merchants & Mercenaries. Gino took over Upcomingdiscs Dec 1, 2008. He works out of a home theater he calls The Reel World. Favorite films: The Godfather, The Godfather Part II, The Body Snatcher (Val Lewton film with Karloff and Lugosi, not the pod people film), Unforgiven, Gladiator, The Lion King, Jaws, Son Of Frankenstein, The Good, The Bad And The Ugly, and Monsters, Inc.
Game Change 12 Days Of Christmas Giveaways – Day 11: UFO Archives From A&E/History