Posted in: No Huddle by Jonathan Foster on January 22nd, 2013 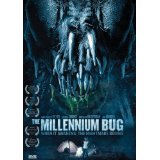 What do you get when two different kinds of horror movies collide? One answer is The Millennium Bug, which combines your typical monster/alien thrill ride with the increasingly popular “Help! I’ve been abducted by crazed rednecks!” brand of horror movie nightmare. It’s better if you think of this film as Alien meets Wrong Turn.

When a paranoid dad (Jon Briddell) hears about the potential problems the Y2K glitch will cause, he decides to take his 18-year-old daughter (Jessica Simons) and new wife (Christine Haeberman) out to the middle of nowhere on New Year’s Eve to escape any possible chaos. No sooner have they set up camp than they are hunted by the crazed, redneck Crawford clan. The Crawfords, led by Billa (John Charles Meyer), are seeking “new blood” for their gene pool because the new “generations” are becoming increasingly mutated. (Who would’ve thought these redneck freaks would know so much about genetics?)

Meanwhile, cryptozoologist Roger Patterson (Ken MacFarlane) is getting excited. Roger is zeroing in on the creature he’s devoted his entire life to proving exists. As the New Year and new millennium dawns, he gets closer to validating his career and gaining fame in the scientific community.

To explain how these two stories collide would be spoiling the rest of this comedy horror film. I’m honestly not sure which one the filmmakers were trying to make. As a comedy, it’s not too bad, with the redneck family providing the laughs with lines like, “Granny, if you shoot at me one more time, I’ma feed you to the hogs!”

As a horror film, it doesn’t quite succeed for a few reasons. First, the two stories don’t really fit together. The rednecks take away from what could be an okay monster movie. Second, these are possibly the worst crazy rednecks in movie villain history. There are numerous times when the kidnapped family escapes and/or gets the better of them, and it’s only because Fate hates these poor people that the rednecks keep getting the upper hand. The final reason has to do with the film’s relevance. It’s 2013, and all the hoopla surrounding the Y2K problem seems ridiculous now. So the movie’s main premise falls a bit flat.

On the plus side, the monster is pretty cool-looking; like something H.P. Lovecraft would dream up. Even more impressive is the fact that the monster was created without the use of CGI. (I’m guessing this is where most of the budget went.) This movie also has two of the coolest/grimace-inducing death scenes: an ax to the face and a wooden stake to groin. The latter will make any and all male viewers wince and groan in sympathy.

The Millennium Bug is a lot like a SyFy original movie, with more unintentional humor and less ‘80s pop stars. If this is your thing, you’ll like it; if not, I say stay away.