Amazing World of Gumball – The Mystery

Posted in: No Huddle by Brent Lorentson on January 31st, 2013 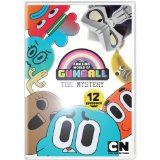 When being handed this title to review I have to admit my expectations were rather low, but as with every other title I was going to give it a chance.  It’s not that I don’t enjoy cartoons or kid-friendly television; I was simply more concerned that perhaps I had reached an age where I simply wouldn’t be able to connect to the material I had to watch.  By the time the credits to the first episode rolled, I quickly moved on to the next episode. Though the show reminds me a lot of Family Guy, there is nothing in the show parents should find offensive and it is suitable for children’s viewing.  Each episode has a running time of about 11 minutes.  With 12 episodes, a parent could easily pop in this DVD and keep their kids entertained while taking care of some chores around the house.

As for the show, well, it’s filled with more goofy randomness that is better left to be seen than have described.  Gumball after all is a twelve-year-old (Cat???) who has a younger brother who is a goldfish and a father who is a human-sized rabbit.  As for the characters that fill out the school there is a tyrannosaurus rex, a piece of toast, and a teacher who is a monkey, as well as a young girl Penny who just so happens to be a peanut with antlers.  It doesn’t make sense, and it’s not supposed to; that’s just part of the fun of the show.

A further example of the shows goofiness would be in the episode The Spoon where Gumball and his brother have to go to the store to buy a present for their mom, and in the process they stumble into a robbery.  The robber is nothing more than a finger print armed with a spoon who convinces the kids to help him loot the store all in the name of charity for bald people.  This turned out to be one of my favorite episodes, and the kids that happened to be watching this along with me seemed to be enjoying it as well.

Other episodes have the characters learning lessons about lying, greed, and love, but it is always handled age-appropriately and never too seriously.  Sure, in some episodes it may be difficult to lift any kind of valuable message, but is it necessary to really tack on a moral to each and every story?  My favorite episode in fact had the kids doing battle against a monster accidently created after Gumball puts a jar filled with an icky concoction in the microwave.

The animation is an oddball mix between 2D and 3D animation with realistic backgrounds and use of some puppetry.  With plenty of flashy colorful characters it’s enough to also keep the kids interested with a catchy theme song as well.  For such a random mix of things thrown together, it’s a bit of a shock how well the show turns out.  And what ties the show neatly together is its writing.  With fun original stories and dialog that both children and adults can appreciate, this is easily a show a parent could enjoy sitting down to watch with the kids.  Granted, I don’t think Pixar has anything to worry about here, but this show is a lot of fun with a lot of replay value.

Brent Lorentson is a horror writer and film critic based out of Tampa, Florida. With a BA in Digital Film, he co-wrote and co-directed Scavenger Hunt. His short stories have appeared in various horror anthologies. In 2019 his short script Fertile Blood will be a part of the anthology horror film Slumber Party. He is currently working on his first novel A Dark and Secret Place set to be released in late 2019. Favorite Films: Taxi Driver, Fight Club, I Saw the Devil, The Wild Bunch, Dawn of the Dead, A Clockwork Orange, Pulp Fiction, Heathers, The Monster Squad, and High Fidelity.
Amy Schumer: Mostly Sex Stuff Bullet to the Head