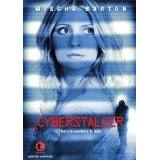 It seems that to survive in today’s world everyone has to be at least a little tech-savvy; even grandma has to learn how to text and download images if she cares to see her grandchildren.  Unfortunately even stalking has evolved with the times; with social media more and more becoming the way we communicate, the days of peeping toms outside the bedroom window are gone and have moved on to webcam.  To some degree I think this should bring a sigh of relief, but then again stalking seems to have gotten easier, allowing more anonymity, and this is what Cyberstalker attempts to delve into.  Though the story boasts to be inspired by true events, the only truth here I believe is that at some point some woman was stalked by a man.

The story kicks off in 1999 when Aiden Ashley (Mischa Barton) has her home invaded by an unknown stalker.  In the process both her mother and father are killed.  The stalker manages to get away without leaving a single trace to his identity, only leaving Aiden behind to become a reclusive orphan.  And by reclusive I mean she becomes a virtual shut-in with a variety of deadbolts on doors and alarms in place.  Thirteen years later Aiden has become a neurotic artist who appears be afraid of doing anything that involves interaction beyond completing a transaction with the food delivery guy.  All these years of therapy clearly have only helped her to develop two relationships, one with her therapist and the other with her art dealer, who has also taken up the role as a surrogate father.

What I found frustratingly annoying with the film is what drives the plot.  Detective Page (Ron Lea) seems to be haunted by this double homicide and unable to close the case on Aiden’s stalker, so to inject fresh blood into this cold case he has a computer expert Jack Dayton (Dan Levy) come in.  What does Dayton do exactly?  Well, he’s the one who points out how technology has improved since Page first got on the case, and that even though Aiden has done a good job staying hidden, with the proper motivation and the right computer programs anyone can be found.  The program used to find Aiden is something that you’d expect the CIA to have, but apparently even this basement stalker looking for Aiden has this program as well.  In fact as we watch the police, intercut with the stalker trying to locate Aiden, the viewer should be comforted by how unrealistic this technology is (a program that uses brushstrokes to identify an artist like a fingerprint).  The technology becomes all the more over-the-top as the cyberstalker is able to tap into city cameras and manipulate crossing signals, and apparently there is even an application on phones that will allow you to unlock deadbolts.

The film tries to deliver a suspenseful tale where any character could be the stalker, but for anyone who has caught an episode of Murder She Wrote, this one should be an easy one to crack.  Even for a made-for-TV film this should have been a lot better than what was delivered.  Before this I wasn’t much of a Mischa Barton fan, but she actually stood out as one of the better things about the film.  She plays the victim well, trying to give her character some strength beneath her fragile facade.  Giving Aiden a love interest, Paul (Marco Grazzini), was something the film had going for it.  Is he the stalker? This idea should have been played with more before they decided on revealing one way or the other.  This is supposed to be about a woman taking a chance on letting someone in, after all her entire life her fear has pushed everyone away.  Instead of exploiting her fear or her ability to take a risk, instead the film bumbles around following an old detective who is trying to learn all this new technology.  Everything comes too easily for these characters simply to move the thin plot forward and never gives us a chance to simply get to be with these characters.  In the end the film is an experience I’d like to control, alt, and delete from my memory bank.

Brent Lorentson is a horror writer and film critic based out of Tampa, Florida. With a BA in Digital Film, he co-wrote and co-directed Scavenger Hunt. His short stories have appeared in various horror anthologies. In 2019 his short script Fertile Blood will be a part of the anthology horror film Slumber Party. He is currently working on his first novel A Dark and Secret Place set to be released in late 2019. Favorite Films: Taxi Driver, Fight Club, I Saw the Devil, The Wild Bunch, Dawn of the Dead, A Clockwork Orange, Pulp Fiction, Heathers, The Monster Squad, and High Fidelity.
Jersey Shore – The Uncensored Final Season Carol Burnett Show: This Time Together