Posted in: Disc Reviews by Jeremy Butler on April 1st, 2013 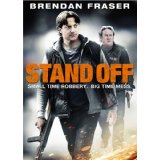 Timing is everything in life; being in the right place at the right time could mean great fortune. Of course the other side of that coin is that being in the wrong place at the wrong time could mean great misfortune; want to guess on which side the coin landed in Stand Off? (Hopefully you guessed misfortune; otherwise stop reading now.) Brendan Fraser leads the comedy about a botched robbery which eventually transformed to an even bigger mess. I’ve been a Brendan Fraser fan dating all the way back to Encino Man, and I was especially excited when he achieved action hero status with the The Mummy franchise (the final film excluded of course), but every now and then, it’s nice to see an actor return to familiar territory.

Fraser stars as Joe Maguire, a South Boston antique seller hiding out overseas after a hit is put out on his life by his mob boss father-in-law. While hiding out, Joe meets Sophie (YaYa DaCosta, Tron: Legacy), the store owner across the street from his cousin’s shop, and the two strike up a relationship. As a romantic gesture, Joe decides to make dinner for Sophie. Upon returning to from the market Joe witnesses the same suspicious character who has been lurking around the store going inside. Unsure whether the man plans to rob the store or collect on the contract out on his life, Joe brandishes a firearm and prepares to enter unaware that a copper (how they refer to policemen or policewomen across the pond; doesn’t that sound cool) has seen him remove the weapon, but we’ll come back to that.

What Joe doesn’t know is that the man who entered his store is hiding out from a botched robbery attempt on the local fish market, but let’s start at the beginning to avoid confusion. Here we go; the man in the store’s name is Jim (Martin McCann, The Pacific), and Jim has just recently become a father. Dead broke with no real prospects to support his new family, Jim does what seemingly many young new parents do: he makes it worse by borrowing money from the wrong person; the wrong person in this case being Douglas “Mad Dog” Flynn (David O’Hara, Contraband), a local gangster whose reputation for brutality has his own mother fearful of him. As expected, Jim’s debt is called in and he has no way to pay. To alleviate his debt, Jim makes a shameful robbery attempt that ultimately fails and forces him to find a place to lay low.

Okay, now we are all caught up. As Joe is about to enter the store he is stopped by the copper. Unintentionally and in a very comical manner, Joe ends up disarming the cop and having to escape into the store. Startled, Jim accidently fires his gun, missing everything but forcing the officer to retreat and call for backup. As backup arrives lead by Detective Inspector Weller (Colm Meaney, Hell on Wheels), Joe realizes that the police believe him to be the culprit of the failed fish market robbery now holding hostages inside his cousin’s store. As if the hit on his life wasn’t enough to deal with.

I love films like this where the main character gets entwined in a situation they have nothing to do with and are forced to try and dig their way out; it’s always interesting to see how the story will unfold and how the main character will find his way out. Stand Off unfolds in a unique way because it’s not just one point of view but several: Joe’s, Jim’s, Weller’s, and Mad Dog’s, each one intertwined by this solitary event. Adding a bit of a drama to the story is the reveal that the two leads share a personal tie. The reveal was a great addition to the underlying story as well as the turning point of the movie for me; up until this point in the film, I was sure of my opinion. The comical aspect of the film was enough to keep me entertained, but there hadn’t been anything that set the film apart. Afterwards, the film’s tone shifts as the two leads’ relationship goes from antagonistic to collaborative.

The film’s comedy doesn’t present itself in an outlandish way but in a more subtle fashion that keeps pace with the overall tone of the film. The most entertaining sequence would have to be Joe accidently disarming the cop which ultimately led to his predicament; like I said, timing is everything.

Jeremy Butler is a film school graduate of the International Academy of Design and Technology. He is been writing for Upcomingdiscs since 2012; however, movies have played a big part of his life for much longer. Favorite genres include horror, science fiction/fantasy, and comedy. Favorite movies are V for Vendetta, Boondocks Saints, Kiss Kiss Bang Bang, and The Godfather.
The Sandlot: 20th Anniversary Edition (Blu-ray) Contest: Win Lincoln On Blu-ray From Dreamworks