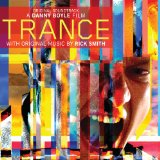 The power is in the mind, or at least it is in Trance, the latest psychological thriller from Academy Award winning director Danny Boyle. From the original trailer I saw of this film, I had the wrong impression of this film completely; I was intrigued by the film, but I just expected it to be another heist film. Now, for the record, I love heist films; I love the watching the thieves plan the heist, I love watching them execute the theft, and I even love the eventual double-cross that everyone always sees coming. To call Trance simply a heist film is to severely undersell its value.

Trance wastes no time getting into the action. From the opening bell we are introduced to Simon (James McAvoy, X-Men First Class), a fine arts auctioneer at a prominent auction house. Simon then proceeds to break the fourth wall and explain the evolution of art heist. “Back then all it took was a bit of muscle and a lot of nerve.” Simon then commences to instruct the audience on procedure in the event that a heist should be attempted, which immediately leads in to an actual heist occurring at the auction house. A four-man team led by Franck (Vincent Cassel, Black Swan) storms the building with guns, smoke grenades; the whole she-bang. As Simon tries to secure the painting in the vault, he is confronted by Franck, and while trying to protect the painting, suffers a blow to the head.

After being hospitalized for weeks or months (the film isn’t clear on that part), Simon returns home to find Franck and his gang waiting for him. Turns out, Simon was the gang’s inside man on the heist and at the last second pulled a bait and switch, and now the painting is missing. Simon is the only one with the knowledge of what happened to it, but problem is the blow he suffered during the heist has resulted in amnesia and he has no idea where he hid it. Desperate to find the painting, Franck sends Simon to a hypnotherapist, Dr. Elisabeth Lamb (Rosario Dawson, Fire with Fire). Within the first session, Elisabeth discovers the real purpose why Simon wants to recover his memories and because entangled with this group as she works to help Simon find the painting all the while trying to stay one step ahead of Franck and his dangerous gang.

If you are going to see this film, I cannot express how important it is that you arrive on time and that you pay attention. Trance is a film of many layers, plot twists, and role reversals. Boyle does an incredible job tying every detail (no matter if it seems insignificant) of the plot into a nice bow for the best conclusion to a psychological thriller I’ve seen since Inception. On the negative side, Trance has so many twist and turns along with false reality that after a while it becomes difficult to determine which reality is real. There is a high probability that you may leave the theater scratching your head wondering whether certain events actually happened, or was it just a figment of McAvoy’s imagination?

Dawson is the breakaway star in the film as well as contributing one of the sexiest scenes I’ve seen in a film in quite some time. If you haven’t already heard or guessed, the film does contain nudity, but not simply to draw in the male audience; the scene is tastefully done and has a certain artistic elegance to it. McAvoy and Cassel fit well into their initial roles, but as the film progress and circumstances change, both performances start to lack.

Jeremy Butler is a film school graduate of the International Academy of Design and Technology. He is been writing for Upcomingdiscs since 2012; however, movies have played a big part of his life for much longer. Favorite genres include horror, science fiction/fantasy, and comedy. Favorite movies are V for Vendetta, Boondocks Saints, Kiss Kiss Bang Bang, and The Godfather.
42 The Place Beyond the Pines