Al Madrigal Why Is the Rabbit Crying?

Posted in: No Huddle by Brent Lorentson on June 6th, 2013 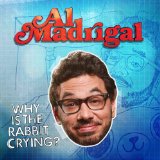 I wasn’t all too familiar with Al Madrigal’s work before receiving his album to review.  After looking up his web site I had realized it was The Daily Show with Jon Stewart that I had recognized him from, but I wouldn’t go so far as to say I was a fan.  With comedians, though, going into their act knowing very little about them, most often the experience seems to be more enjoyable; after all, with no expectations it’s hard to come away disappointed.

Six months ago I’m not sure how much I would have been able to relate to Madrigal’s set, a set that has a very distinct storytelling style, and his stories for the most part consist of him being a father.  Sure, not everyone has to be a parent to find his set funny, but had I not recently had a child come into my life in the past few months I don’t believe I’d connect with as much of his set as I did.  Whether Madrigal is discussing how he disciplines his children when they talk back or talking about hiding from the kids just to embrace a little alone time, he maintains a narrative that everyone in the audience can appreciate.

A story from his college days where a housekeeper gets into some of his and his roommate’s drugs is something he vividly relates to the audience and for me this was my favorite story.  Towards the end of the yet, I felt he was losing a bit of steam and his playfulness seemed to feel a little bitter.  It was still enjoyable, but the set felt maybe fifteen minutes too long.

This Comedy Central special is released on a two-disc set with a CD and DVD with the performance on both.  The DVD comes with a few bonus features; the standout feature is a running commentary between Al Madrigal and Louis Katz as they talk over a standup special Madrigal did back in 2005.  I can’t recall ever seeing or hearing a commentary over a standup act before, and the insight you get as the comedians dissect his routine is at the very least a refreshing addition to the DVD.  What you’ll also find on the DVD is a short animated imagining of a story Madrigal tells about one of his trips to Mexico; it’s only a few minutes and worth a quick look.  And rounding out the DVD is a segment from The Daily Show where Madrigal was a correspondent.

Though I wouldn’t say the Madrigal knocked this set out of the park, the packaging does offer enough bang for the buck.  I’m not sure how much of a replay value it will have for most, but there are a few segments I won’t mind throwing in the CD player while taking a drive.

Brent Lorentson is a horror writer and film critic based out of Tampa, Florida. With a BA in Digital Film, he co-wrote and co-directed Scavenger Hunt. His short stories have appeared in various horror anthologies. In 2019 his short script Fertile Blood will be a part of the anthology horror film Slumber Party. He is currently working on his first novel A Dark and Secret Place set to be released in late 2019. Favorite Films: Taxi Driver, Fight Club, I Saw the Devil, The Wild Bunch, Dawn of the Dead, A Clockwork Orange, Pulp Fiction, Heathers, The Monster Squad, and High Fidelity.
Contest: Enter To Win Dance Academy: Season 1, Volume 1&2 From Flatiron Films The Purge