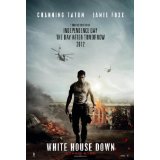 In 1988 a movie by the name of Die Hard became a worldwide commercial success and helped launch the career of one of Hollywood’s most prominent action stars. The legend of the film transcends time and space as it is still to this day a beloved film, and its name has become synonymous with what an action film is. In 2013, another film looks to capture that same type of glory, a film I believe has the potential to become this generation’s Die Hard, and not because both film’s main character’s first name is John. White House Down is an explosively entertaining experience brought to life from the director that brought us Independence Day, 10,000 B.C., and 2012.

John Cale (Channing Tatum) is a former decorated soldier turned U.S. Capital police officer assigned to the protection detail of Speaker of the House of Representatives, Eli Raphelson (Richard Jenkins). Divorced with one daughter, Emily (Joey King) who once idolized him, but continuous disappointments and absenteeism on his part have caused a strain in their relationship. Calling in a favor, John scores an opportunity to interview to join the Secret Service and join President James Sawyer’s (Jamie Foxx) protection detail. To earn some brownie points as well as repair the rift between him and his daughter, he takes Emily with him to the White House, an opportunity that Emily jumps at due to her borderline obsession with all things politics.

He is interviewed by Secret Service agent Carol Finnerty (Maggie Gyllenhaal) with whom he shares a past. Despite many exemplary marks, Finnerty cites her belief that Cale is not fit to be an agent. After the interview, Emily talks her father into going on a tour of the White House. During their tour, the White House is attacked by a paramilitary group led by disavowed black ops agent Emil Stanz (Jason Clarke) who takes control of the White House and captures President Sawyer. Amidst the struggle, Cale gets separated from his daughter. As he searches for her, he stumbles upon the President and his captors and rescues him. Now trapped and hunted within the White House, Cale and President Sawyer must work together to find a way out while at the same time trying to find Emily, who is in hiding somewhere inside.

White House takeover films are popular this season as White House Down was beaten to the box office by Antoine Fuqua’s star-studded action flick Olympus Has Fallen. Olympus will definitely prove to be steep competition, but I believe this film is up to the task. The storyline keeps rhythm throughout its duration, building suspense when necessary and providing a great action sequence often enough to stave off boredom. Tatum holds his own; you can always count on him for a quip or a battle that requires putting his body on the line; Tatum is good, but Foxx is excellent as the Commander and Chief. Trust me, I am aware how it sounds; I too was skeptical of the idea of the actor playing the President. Don’t get me wrong, I love Jamie Foxx, but when you are portraying the leader of the free world you must present a certain ideal of wanting to change things for the better, a desire to believe in the good of others, which Foxx does flawlessly. His presidential moment comes during a monologue midway through the film where he speaks about the illusion of taking office and his conviction to have a defining moment that changes history like his predecessors.

Though a majority of the film’s time is spent following our two leads, there is one more actor that makes her presence known and deserves mentioning…Mrs. Joey King. As Cale’s daughter, she is inquisitive and easily holds her own against her established costars, a future leading lady in the making.

Now, you may believe calling White House Down this generation’s Die Hard is a bit excessive, but I’m just calling it like I see it. In fact it is possible that the two film’s similarities could prove to be a deterrent for the film’s overall box office success, but before passing judgment we must first examine all the qualities this story possesses that should make the film money in the bank: Ronald Emmerich, a director whose films have grossed more than $3 billion worldwide and is responsible for bringing to life some of Hollywood’s biggest blockbusters, an Academy Award winning actor and People Magazine’s “Sexiest Man Alive” names on the marquee, and nonstop action paired with buddy-cop comedy. Sounds like money in the back to me.

Jeremy Butler is a film school graduate of the International Academy of Design and Technology. He is been writing for Upcomingdiscs since 2012; however, movies have played a big part of his life for much longer. Favorite genres include horror, science fiction/fantasy, and comedy. Favorite movies are V for Vendetta, Boondocks Saints, Kiss Kiss Bang Bang, and The Godfather.
Saving Lincoln Exclusive Interview With Calvin Reeder: Writer/Director of The Rambler