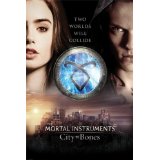 “Everything you’ve heard… about monsters, about nightmares, legends whispered around campfires. All the stories are true.”

Has anyone notice the fire sale that has been going on among film studios and young adult novels? Since Twilight neared its end (and before), the market is has become flooded in recent years with adaptation after adaptation, and it doesn’t appear to be slowing down anytime soon, especially with announcements of plans to adapt novels like Divergent, Ender’s Game, and Vampire Academy; everyone is looking for the next big phenomenon to fill the void left by Twilight. If there was a series that could accomplish that goal, The Mortal Instruments: City of Bones was the one that had my vote. However, after seeing it, I have some doubts. I’m not saying it can’t ultimately accomplish it, but the series will definitely need to make a few adjustments and will have its work cut out for it.

Clary Fray (Lily Collins, Mirror Mirror) has grown up believing that she is nothing more than an ordinary girl living in New York City. That reality is shattered after she visits the Pandemonium Club; Clary witnesses a murder of a club patron carried out on the dance floor by three people; the problem is despite there being people all around when it happened, no one else saw it or can see the three standing right in front of them. The next day, strange things begin to happen to her. She awakens to find that in her sleep, she has drawn the same symbol over and over again. Then while out with her best friend Simon (Robert Sheenan, Misfits), Clary sees Jace Wayland (Jamie Campbell Bower, Twilight Saga) again, one of the boys from the nightclub is watching her but again she realizes she’s the only one who can see him.

While confronting him, Jocelyn (Lena Headey, Game of Thrones), Clary’s mother, is attacked. She manages to fight off her attackers long enough to send a warning to her daughter, telling her that she is in danger and to not to return home. Naturally that is the first thing that Clary does, and when she does she finds their apartment trashed and her mother missing. Not only that, Clary comes face to face with her first demon. Saved by Jace, he explains to her that he along with Alec and Isabel Lightwood, the other two she saw him with at the club, are Shadowhunters, a half-angel half-human race of warriors charge with safeguarding the world from demons. Suddenly finds herself in the middle of a world that she never knew existed and battling an enemy she never knew she had, a rogue Shadowhunter named Valentine (Jonathan Rhys Meyers, The Tudors).

As I said above, this series has its work cut out for it. Its main problem is the rapid pace at which the film moves; from the beginning the audience is thrust into the thick of things without any real build-up or time to get acquainted with the characters. Loyal followers of the novels will be able to follow what’s happening, but I imagine even they will have some trouble keeping up. Now I understand the difficulty to encompass everything from the almost 500-page novel into a little over two hour film, but the speed at which the story moves compromised more than a few portions that this loyal novel follower found important to the overall story like the sequence at Magnus’s party and the church sequence. Those were important sequences where important reveals about certain characters were made public, but before it had time to resonate with the audience, we were on to the next sequence.

Another issue is that the film changed too many aspects and took too many liberties from the source material. Fans are sure to take offense with a few of the changes made to their beloved book series. I don’t want to go into too many details about this portion, but I will say that it is likely a few die-hard fans will definitely being saying, “That is not how it happened in the book.”

The film does have its redeeming qualities such as the action sequences, which thankfully are legion. Naturally the action also differs from the book, but this instance is forgivable because it displays just how fierce Shadowhunters are and ensures that girls will have no trouble convincing their boyfriends to come with them see the film. Also on the plus side is that cast fits their roles perfectly for the most part, none more than Bower, who appeared to be made for the role of Jace Wayland. Collins makes a fitting Clary Fray however; there were a few moments where lines to appear genuine coming from her. All that disappears in the greenhouse scene between Collins and Bower, as their chemistry culminates in this scene that is sure to leave fans happy.

Overall, The Mortal Instruments delivers the book’s most important details to the screen; only the real sticklers are going to raise a big fuss. Though I do believe that more time needed to be spent on key moments from the book, I also get that was not entirely possible considering including everything that it did it was already quite long. As it is, The Mortal Instruments will satisfy fans and bring in a few new ones as well.

Jeremy Butler is a film school graduate of the International Academy of Design and Technology. He is been writing for Upcomingdiscs since 2012; however, movies have played a big part of his life for much longer. Favorite genres include horror, science fiction/fantasy, and comedy. Favorite movies are V for Vendetta, Boondocks Saints, Kiss Kiss Bang Bang, and The Godfather.
Paranoia Once Upon A Time: The Complete Second Season (Blu-ray)