Posted in: No Huddle by Jeremy Butler on October 6th, 2013 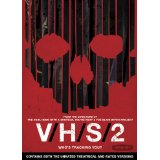 You know, it’s odd, I had the strangest feeling of déjà vu while watching V/H/S 2. Just kidding, and that feeling is probably due to the fact that I wrote the review for the original V/H/S. In my original review I spoke about the history of the found-footage technique; this time around I think I will address the fine line that must be walked to make a successful sequel. See, the trouble with sequels is that they tend to stray too far away from what attracted people to the original. The key is to maintain enough of original that attracted the first audience, all the while also providing enough difference to bring in a new crowd. Challenging, isn’t it?

Divided into five separate tales this time (there were six in total in the first one), the style was remarkably similar to the first one, which works in its favor; consistency is an important aspect when it comes to doing a sequel.  This time around, the film features a whole new crop of directors and only two returnees, Adam Wingard and Simon Barrett. The movie does an excellent job of maintaining the format; however, the individuals are little weaker than in the original, investing more time into the gore than in the development of each story. Either there is no buildup whatsoever and the audience is thrown immediately into the thick of things, or there is too much buildup to the point the overall story suffers; there is not really any middle ground.

The narrative story, Tape 56 is slightly better than the narrative story from the original. It features a couple of private investigators looking to the case of a missing teenager. Having loose morals as shown by their willingness to sell back evidence of an affair to the person they were hired to watch, the group breaks into the teens’ house and find it vacant (or so they think). What they do find are dozens of VHS tapes containing unbelievable phenomena. What made this tale stand out more than the other narrative was that Tape 56 was reference more in the film; in between tapes, the story would return the this storyline and show the effect watching the tapes was having on the characters instead of launching into a new storyline.

Clinical Trials has a subtle beginning; after a car accident causes him to lose one of his eyes, a man consents to have a camera that will act as his eye implanted into his head. Everything starts off all right; he gets back into the routine of his life, but by nightfall he begins to see strange apparitions. Immediately assuming that the implant is malfunctioning, irritation becomes terror as the apparitions start to come after him. This first tale is a bit of an attention-grabber; there are plenty of parts to make you jump. However, the story is very brief; I would have enjoyed a little more as well as an elaboration on why the implant was causing him to see things.

A Ride in the Park is an example of no buildup whatsoever; one minute we are following the main character on a joyful bike ride, the next thing we know he is attacked and transformed into a flesh-eating zombie. No shortage of gore, of course, and it does an excellent job of highlighting it, but the speed at which everything was unfolding was a hard thing to get over. Safe Haven is the polar opposite of the previous storyline; too much buildup. The short does manage to redeem itself partially when the action starts, taking on a first-person-shooter-game quality that was very enjoyable until the very end when the story just went completely off the deep end.

The final tale, Slumber Party Alien Abduction was probably the weakest of the five. Too much buildup and not enough intrigue. It’s your straightforward alien abduction but it relies too much on the shaky cam technique which made me more dizzy than interested. It seemed that they were attempting to rely on shaky cam technique to mask the generic look of their aliens.

V/H/S 2 makes a decent sequel, following the rules of sequel quite well all while attempting subtle changes that would set it apart. Some of the changes like referencing the narrative storyline more worked, while others such as the shaky cam did not. All in all, I would call the film a success.

Jeremy Butler is a film school graduate of the International Academy of Design and Technology. He is been writing for Upcomingdiscs since 2012; however, movies have played a big part of his life for much longer. Favorite genres include horror, science fiction/fantasy, and comedy. Favorite movies are V for Vendetta, Boondocks Saints, Kiss Kiss Bang Bang, and The Godfather.
Gravity “31 Nights Of Terror” Win Girls Gone Dead (Unrated and Exposed Edition) On DVD