Posted in: No Huddle by Jeremy Butler on January 1st, 2014 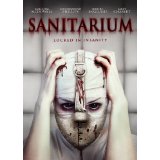 “Insanity, it’s a disease that spreads through the mind. Generating twisted and deranged thoughts inside the human brain, making us do awful horrendous acts, much farther beyond the normal sphere of the imagination.”

A collection of ghost stories set in a sanitarium suitable for a Halloween horror screening told in a Tales from the Crypt style. Terrence Stamp acts as narrator for three tales of people driven mad and committing horrific acts. Stamp is the head doctor at sanitarium and introduces us to three guests of his facility, informing us of how they came to become guests. The scream factor on the tales isn’t that high, and the atmosphere for each of the stories is a bit on the tense side, but as a whole the collection has value. John Glover, Lacey Chabert, and Lou Diamond Phillips star in each of the tales, but it actually Terrence Stamp’s intro that sets the stage for each story.

The first tale follows Gustavo (John Glover, Smallville), a brilliantly creative artist whose creativity walks hand and hand with his insanity. After the success of his showcase Gustavo, who also has created a set of figurines for his own entertainment, slowly begins to dive deeper and deeper into his own psychosis as the figurines begin to fill his head with paranoid delusions that the people closest to him including his best friend and manager (Robert Englund) are conspiring against him and plotting to steal his precious figurines. Unwilling to allow anyone to steal what he holds most dear, Gustavo acts to protect what belongs to him with murderous intent.

It took a while for this story to pique my interest. John Glover plays the role of the mad artist to a tee, but the story of a creative genius going insane isn’t exactly breaking new ground. Also, there wasn’t enough backstory for me. For one we don’t get a clear picture of what kind of condition it is that Gustavo is suffering from; the only thing we are informed of is that he appears to hear the voices of his dolls very clearly in his head. This tale also has a bit of a twist ending which actually turned out to be very rewarding in the end, as it took me by surprise.

The second tale follows a teacher (Lacey Chabert, Baby Daddy) as she becomes concerned for the safety of one of the students in her class. After seeing mysterious bruises on his neck and his inability to provide her with a reasonable explanation for them, she begins to suspect that the boy’s father is doing him harm. Eager to protect him from the suspected abuse, she acts in what she believes to be the best interest of the boy and finds herself in the middle of a situation much greater than she anticipated.

The atmosphere for this story is probably the tensest of the three and the most fantastic, as the story is rooted in the delusions through the eyes of the young man who my heart immediately went out to given what he suffered. When it comes to this story, it is best to leave practicality behind, as the plot of this story exists in the fantasy of the boy.

The final tale, another tale of genius teetering over into insanity; however this time from more of an obsessive point of view. A professor’s (Lou Diamond Phillips) obsession with his work and belief that the end is near lead to a self-imposed isolation, which in turn creates a kind of cabin fever. The prolonged isolation leads to voices, and voices result in delusion and the inability to differentiate between real and not real, culminating in the loss of what he holds most dear.

This story actually has an interesting twist towards the end, and Lou Diamond Phillips puts his heart and soul into his portrayal. The evidence of this is clear in his rant when he argues with the mysterious voice in his head that may not actually be just in his head. Of the three tales, this is probably my favorite; however, it is in strict competition with the first tale, as both Phillips and Glover put on quite a show. The second tale is just a little too fantastic for my taste and offers no real resolution or explanation for the events that unfold, leaving me with nothing but questions.

Jeremy Butler is a film school graduate of the International Academy of Design and Technology. He is been writing for Upcomingdiscs since 2012; however, movies have played a big part of his life for much longer. Favorite genres include horror, science fiction/fantasy, and comedy. Favorite movies are V for Vendetta, Boondocks Saints, Kiss Kiss Bang Bang, and The Godfather.
12 Days Of Christmas Giveaways – Day 8: China Beach Seasons 1 & 2 From Timeless Media/Star Vista 12 Days Of Christmas Giveaways – Day 9: Ancient Aliens: Season Three