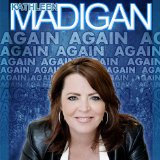 It’s been an immeasurable amount of time since I’ve come across a standup comedy routine that I have enjoyed wholeheartedly. I mean the type of comedy that makes you laugh so hard that the muscles of your stomach begin to ache due to the constant laughter. There are few comedians that have elicited that type of response from me, years since I’ve felt the sensation. Despite the lapse of time I remain optimistic, continuing to remain hopeful that the feeling will return with a new comedian. So it was with that attitude that I endured Kathleen Madigan: Again. Let’s just say that my wait for that sensation to return, continues.

Kathleen Madigan is by no means a new comedian; though before this disc crossed my desk I had never heard the name, I was aware of that fact from the very beginning. There was a set rhythm to her routine that can only come from experience. Despite her experience, her set still left me hungry. She clearly has perfected her craft, and the audience, which I suspect was filled with loyal fans of hers that have been watching her for years, appeared to enjoy her spiel; I was not among those who laughed.

Reliability is a pivotal part of a comedian’s arsenal, his or her ability to talk about the everyday things that average people think about and voice what the average man cannot. Madigan and I never got on the same page. Her topics including her love of drinking, her family, and her preference for John Denver were all subjects that have no basis in my life. The one subject that she talked about that interested me was when she discussed the times that she travelled across seas to perform for our troops. That was her only moment of substance with me; well, perhaps it was more her description of the climate in Afghanistan that more appealed to me. Her example of how to describe the climate to her brother was the only moment of laughter that I can recall during the hour-long special. However, as I said, it was not that gut-wrenching laughter that I was hoping for, merely a light chuckle.

In my opinion, the routine lacked the big jokes, significant ones that the comedian was really passionate about. While we are on the subject, that was another thing that I noticed was scarce during the special. Madigan had her routine down pat, but her voice never really rose beyond his normal volume; it was rehearsed. Not uncommon given this taping of the special was probably the 100th time she had been through the routine, but something is lost when you are simply going through a routine. The words lose meaning, and if your words don’t have meaning for you, it is highly unlikely they’re going to have meaning for your audience. They didn’t for me.

Jeremy Butler is a film school graduate of the International Academy of Design and Technology. He is been writing for Upcomingdiscs since 2012; however, movies have played a big part of his life for much longer. Favorite genres include horror, science fiction/fantasy, and comedy. Favorite movies are V for Vendetta, Boondocks Saints, Kiss Kiss Bang Bang, and The Godfather.
Star Trek: Enterprise – Complete Third Season (Blu-ray) Power Rangers Megaforce the Mysterious Robo 2