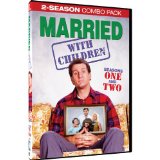 On October 9th 1986 the network television landscape did something that hadn’t been done successfully in its 40-year history. A fourth network broke on the airwaves. It was called FOX and wasn’t even going to broadcast seven days a week. Most pundits in the television industry never gave it a chance. Most of the channels were in the double-digit UHF range. This had long been considered the independent station area, and a lot of televisions didn’t pick up this band as well as the established VHF band. And for a while it looked like the network was going to disappear almost as quickly as it appeared. But by 1987, the network suddenly had two big hits on its hands. The first was a silly cartoon, originally aired as a throwaway segment on a variety show. The cartoon featured the most unlikely of television families, The Simpsons. That show is still with us nearly 25 years later. The second hit was a live-action series, also based on a very unlikely and this time seemingly unlovable family, the Bundys. Right from the start there was criticism that the name itself was a death knell. At the time America was still dealing with the pending execution of a far more infamous Bundy. Married With Children, however, would become an almost instant breakout hit.

Al Bundy (O’Neill) was a working stiff. He had seen his high school glory years evaporate into the rearview mirror of his ancient Dodge when he married his childhood sweetheart (no, I did not misspell), Peggy (Segal). The red-headed woman would soon become his curse. She was lazy. Peggy wouldn’t know what a stove looked like if it fell on her. She was content to sit around all day while Al worked for minimum wage at a mall shoe store. Tying Al to his meager existence were two children. Bud (Faustino) was a frustrated teen who couldn’t seem to find his cool. Girls scorned him, and he appeared to be headed to the life of his father. Daughter Kelly (Applegate) was a teen slut. She slept around and used her looks to make her way in life, which was likely good, because she was dumber than rocks. Al was also plagued by neighbor Marcy (Bearse) who was a feminist and usually a thorn in Al’s behind. Most of the material involved Al’s suffering and the apathy of his family to his lowly station in life.

This was a show that rarely changed. Sure, a couple of characters came and went, most notably Marcy’s first husband, Steve (Garrison). Peg was the foil, and we would love to see Al get just inches from something he wanted badly, because we wanted to see just how it was going to be removed from his grasp. It was predictable. Al was destined to fail in everything that he did. Never before was misery so much fun. Perhaps Al’s life put ours in some kind of twisted perspective. Compared with his existence, ours might not be so bad after all. Whatever the reason, America loved to watch the suffering. The role was played perfectly by Ed O’Neill, who would find it hard to get the more serious roles he sought when Married ended. Since that time I’ve been very impressed with the range he’s shown, but he’ll always be Al Bundy to me, and most of the television watching universe. With Modern Family doing so well it’s been good to see him embrace his comedy roots once again.

Mill Creek has put together the complete first two seasons in one affordable release. You’ll find all of the episodes on three discs. There aren’t any extras, but it should be noted that the original Frank Sinatra Love And Marriage theme song has been returned. The original releases had it replaced with a really crappy knockoff. I’m not happy that all of the discs exist on a single spindle. It’s common with Mill Creek releases. I love what they’re doing, but wish they’d rethink that idea. It’s easy for a disc to get damaged.

This is where it all started. You get both season 1 and season 2. And really, “you can’t have one without the other”.

Gino Sassani is a member of the Southeastern Film Critic's Association (SEFCA). He is a film and television critic based in Tampa, Florida. He's also the Senior Editor here at Upcomingdiscs. Gino started reviewing films in the early 1990's as a segment of his local television show Focus. He's an award-winning recording artist for Omega Records. Gino is currently working on his 8th album Merchants & Mercenaries. Gino took over Upcomingdiscs Dec 1, 2008. He works out of a home theater he calls The Reel World. Favorite films: The Godfather, The Godfather Part II, The Body Snatcher (Val Lewton film with Karloff and Lugosi, not the pod people film), Unforgiven, Gladiator, The Lion King, Jaws, Son Of Frankenstein, The Good, The Bad And The Ugly, and Monsters, Inc.
12 Days Of Christmas Giveaways Winner Circle Vikingdom