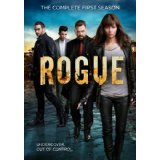 Until recently DirecTV’s Audience Network was a home for critically acclaimed shows that somehow lost their feet on another network. It started with Friday Night Lights and more recently with Damages. So DirecTV was no stranger to original series production. Now for the very first time the satellite carrier and network have developed their own television series. Rogue would be the first show on the network not to have played somewhere else first. The effort is a collaboration with eOne and Greenhouse Entertainment. From the first 10 episodes of the first season, you can bet it’s a pretty wild ride and a relatively strong start.

Grace Travis (Newton) is an undercover cop for the San Jose Police Department, on loan from the Oakland Police Department. She is deep undercover and has managed to get quite close to kingpin Jimmy Laszlo (Csokas).When her son is killed in an apparent random drive-by shooting she is devastated and pulled from her cover and put on leave. That is until she discovers there might be a link between Laszlo’s organization and her son’s killing. Someone within Jimmy’s crew is trying to take him out, and a bullet comparison ties his traitor with her son’s death. Without permission she goes back under. When her cover is blown she ends up striking a deal with Jimmy to find the person that both of them want. It’s a tricky accommodation that will send ripples through her family and work colleagues.

Among the people drawn into Grace’s obsession are her husband Tom (Smith) and her daughter Evie (Jeffery). Grace’s actions are tearing them up emotionally. Her handler Buddy Wilson (Hart) takes a lot of heat when the brass finds out about her unauthorized operation, and yet he still tries his best to help her out with inside PD information. Another fellow cop Mitch (Tracey) has a reputation of being a crappy cop who can’t close cases. He’s been trying to sole the murder of Grace’s son and suffered more than a little of her wrath when he comes up empty. Still, he also tries to help her when she goes back under. If Grace goes down, she’s going to take a lot of folks down with her.

The first impression you get on this show is that it has a very British feel to it. There are several very good reasons for that. Executive Producer Nick Hamm is a Brit who originally developed the concept as a Scotland Yard thriller for British television. He couldn’t get the interest he wanted and finally got the chance to do the show in Canada with an American setting. Still, most of the cast are also British, relying on those famous American accents. Thandie Newton who plays Grace and Martin Csokas who plays Jimmy are both British as are many other members of the ensemble cast. We also find British writers and crew along for the ride as well.

Putting aside that British feel, the show takes a few episodes to finally find its legs, and the initial awkwardness eventually gives way to some compelling drama. Both Newton and Csokas are pretty amazing in their roles along with a strong supporting cast. The show delivers some original material and takes advantage of its cable home to keep the show edgy and most certainly adult. It’s the tight writing and pacing that keep the ride interesting even when it becomes a little predictable. Rogue is at its best when it’s moving quickly. When it lingers you begin to see some of the flaws, and that certainly minimizes the entertainment value.

The main concern is that there are no really redeemable characters here, except in the support area. Yes, we’ve learned that it’s OK to root for bad guys. Tony Soprano and Vic Mackie are just two wonderful examples. But Grace doesn’t really appear to be good or bad. She’s both and neither at the same time. We are continually assaulted with Grace facing the damage her actions do to her family. Thanks to wonderful acting by Newton, we feel that she feels guilty about it. Yet with tears in her eyes she continues down a path she completely understands is not only self-destructive but dangerous and harmful to the people around her. The contradiction is glaring perhaps because Newton sells it so well, perhaps too well.

The show’s production design is a major plus. Yes, it’s Canada subbing for the California Bay Area, but it’s convincing enough to any except perhaps the people who live there. I love the establishing shots. They are absolutely incredible because they are so beautiful yet still not glossy. So often shows and films deliver glamour shots with manic edits and pulse-pounding bass tones to sell locations that appear completely discarded when the feet hit the pavement for the actors. We’re treated to the tourism board locations that have little to do with where things like this happen. Not so with Rogue. These shots sell an area that’s totally believable and help to set a tone for the series that brings us in close enough to believe what happens here. It’s a refreshing change from the hyper-realism a show like this usually tends towards.

A serious flaw in the production design, however, has to be the elongated sex scenes. I understand that these guys want to exploit the show’s freedom, but this is the one place the production design succumbs to that hyper-realism, and these scenes go far longer than they need to. It’s unfortunate that Hamm doesn’t appear to trust Newton’s powerful performance enough that he has to go out of his way to get her naked every episode. There appears to be a British belief that American audiences have to have something titillating to retain their attention. He and his show work best when they trust the audience to get it. It’s a bit of a contradiction. They work so hard to deliver a decidedly adult series aimed at adults but feel the need, from time to time, to treat us like adolescents. Make up your mind, Nick.

Newton and Csokas share pretty wild chemistry, and that’s another huge plus. Because, let’s face it. The accommodation they share just isn’t very believable otherwise. When obsession hits obsession the sparks fly, and that keeps us involved as well. I churned these 10 episodes out in two nights. It was very hard to stop in between. The writing and pacing do a good job of getting you from one episode to another. It’s not so much a cliffhanger philosophy, but a fleeting glimpse of something just around the corner or over the next hill. Even if it turns out to be nothing, you keep pushing yourself to climb “just one more hill”.

You get all 10 episodes on four discs. There is also a short behind-the-scenes feature and a series of webisodes that cover Mitch’s investigation of Sam’s shooting.

I found the ending to be a bit of a puzzler, and I’m not sure yet if I like it or not. It certainly leaves the door open for the next season while bringing a lot of closure to this run of episodes. I get the sense that they were not completely sure if they were returning, so they gave us an ending that could work either way. The show is, indeed returning, and the format will be somewhat different out of necessity. They’re pretty much promising this won’t be a retread. Grace faces her enemy and will have a brand new one when the new season opens. This one will be closer than she suspects. Of course, we’ll know. That should be interesting. “It’s not what you think”.

Gino Sassani is a member of the Southeastern Film Critic's Association (SEFCA). He is a film and television critic based in Tampa, Florida. He's also the Senior Editor here at Upcomingdiscs. Gino started reviewing films in the early 1990's as a segment of his local television show Focus. He's an award-winning recording artist for Omega Records. Gino is currently working on his 8th album Merchants & Mercenaries. Gino took over Upcomingdiscs Dec 1, 2008. He works out of a home theater he calls The Reel World. Favorite films: The Godfather, The Godfather Part II, The Body Snatcher (Val Lewton film with Karloff and Lugosi, not the pod people film), Unforgiven, Gladiator, The Lion King, Jaws, Son Of Frankenstein, The Good, The Bad And The Ugly, and Monsters, Inc.
End Of The World Commitment (Blu-ray)