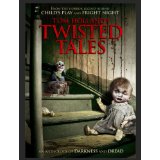 Growing up, several of my favorite films were created by Tom Holland; in my eyes this guy is a legend.  He’s responsible for writing and directing Child’s Play and Fright Night, two 80’s classics that most know about, but he also penned Psycho 2, which I know I’m in the minority but I actually like more than Hitchcock’s. But Holland also wrote this other film Cloak and Dagger with Henry Thomas and Dabney Coleman that was released in 1984, and this was just one of several movies I would watch over and over again to the point I’m sure it drove my parents bonkers.  What’s with the trip down memory lane?  Well, I just want to establish how much I do respect Holland and the work he’s done, because some of his films are responsible for the film geek that I am today.  And it’s because of this when I had the opportunity to review Tom Holland’s web series Twisted Tales, I jumped on it.

The web series has a basic enough concept.  Each episode is a short film that is introduced by Tom Holland; all nine episodes are directed by him, but he only gets credit for writing seven of them.  The episodes originally aired on Fear Net which is also responsible for bringing the project to life.  In concept this is great idea, but in the execution of some of these they not only fall short but are simply bad.  Budget lends a hand to what hurts the overall look of the project, but as I moved through the episodes I couldn’t help but feel that most of these shorts were simply based on ideas thrown out or just never fully developed.

Mongo’s Magic Mirror is perhaps the weakest of the bunch with Ray Wise playing a street magician who has a mirror that can take you to another portal where you can live in a world of your mind’s own creation.  Since this is a short film, we don’t get much in the way of character development, and we just know that a character played by Joel Ward, who believes he is just as crafty of a magician, wants to get the mirror and use it as a way to make a fortune.  How the character manages to get trapped in the mirror and in a world filled with giant worms simply for me seemed silly and just hard to take seriously.

As for an episode that did work, well, there are a few.  The Pizza Guy is about a pizza delivery guy who delivers a pizza to an address where a group of friends are performing a satanic ritual so that Emily (Erin Aine Smith) can talk to her dead sister.  Erin believes there is more to the pizza delivery guy, thinking instead that he is actually the devil and he has to grant her a wish since she conjured him.  This is the longest of the episodes and on IMDB it has it listed as a two-parter.  This is one where with a larger budget and fleshed-out script, I could actually see this working as a silly feature film.

Bite is another short that had it been fleshed out I feel could have been a pretty fun film.  There is a new drug out there, and once you take a hit off it a wave of euphoria hits you and allows you to see into the not-so-distant future.  For our group of friends the drug causes them to mutate into werewolves, while outside the store chaos runs the streets as other werewolves are out and about wreaking havoc on the city.  This was also the story that felt the most like Holland’s work from the 80’s and was the one I had the most fun with.  The makeup effects were a bit to underwhelming, but considering this is simply a web series some things should be forgiven.

In the end only a few shorts stood out, and the rest are mostly forgotten.  The concept is something I feel has great potential; tapping into a web series version of Tales From the Crypt is something I am on board with.  But if Fear Net does decide to go on with this project, please don’t be afraid to throw a little more money into this; this is a concept that has potential, but right now it seems to be floundering and more closely resembling a student film project.

Brent Lorentson is a horror writer and film critic based out of Tampa, Florida. With a BA in Digital Film, he co-wrote and co-directed Scavenger Hunt. His short stories have appeared in various horror anthologies. In 2019 his short script Fertile Blood will be a part of the anthology horror film Slumber Party. He is currently working on his first novel A Dark and Secret Place set to be released in late 2019. Favorite Films: Taxi Driver, Fight Club, I Saw the Devil, The Wild Bunch, Dawn of the Dead, A Clockwork Orange, Pulp Fiction, Heathers, The Monster Squad, and High Fidelity.
Concussion Frozen (Blu-ray)