Heaven Is for Real

Posted in: The Reel World by Archive Authors on April 19th, 2014 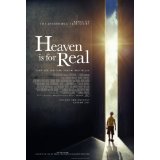 Let me say something about myself. I have a saying. Atheists are stupid and agnostics are smart. The reason agnostics are smart is because they know they don’t know. Faith is belief. The problem is that this is a cynical age. There are so many people who are atheists because they can cite facts about the universe and science. I always think it’s absurd to hear an atheist talk, because they are so insulting to anyone who doesn’t agree with them. So am I an agnostic? I would say I am not. I have faith, but I will say that it is not an easy or blind faith. I have examined all areas of the unknown which includes a wide variety of religions and various scientific investigations. My problem with atheists is that human knowledge is limited. It has grown tremendously, especially in the last century, but the more we learn, the more we open new unexamined areas of knowledge. I’m going to have to come back to that.

Heaven Is for Real is a sincere and enjoyable film of faith. It’s about a family of four who live in a beautiful Nebraska farmland countryside. Todd (Greg Kinnear) and Sonja (Kelly Reilly) Burpo have two lovely young children. They live in a place that seems like heaven. Todd works as a pastor for the local church, a repair man, a volunteer fireman and whatever else he has to do to make ends meet. He is not making ends meet. His four-year-old son gets a ruptured appendix which has complications in emergency surgery. Everyone thinks Colton (Conor Corum) will die, and when the boy finally pulls through, everyone is overjoyed. Colton’s life goes back to normal except for some things he starts remembering. He remembers seeing Jesus on a horse, angels, and a sister he never knew he had.

There is no question an atheist will gag if he is forced to watch this movie. It is also certain that the billions of people who are believers will welcome a sincere and well-made film like this. The acting is better than the average Christian film. Everyone knows Greg Kinnear (As Good As It Gets) is great. Reilly (Sherlock Holmes I and II) is showing up everywhere lately and does a great Nebraska accent. Margo Martindale (The Americans, The Millers, August: Osage County) is also everywhere lately. Thomas Haden Church (Wings, Sideways) adds his talented and unique mixture of levity and seriousness. Randall Wallace (Braveheart) directs. The talent is there. Everyone involved takes the story seriously.

I think it’s important to note that Heaven Is for Real has gotten a serious Hollywood treatment for what is basically a simple story about Christian faith. Hollywood knows there is money to be made, and this goes back to The Passion of Christ which made an enormous amount of money. Hollywood knows they need to find people who understand and believe. Christian faith is not something that you can fake. Heaven Is for Real is a step in the right direction. It is well made, but it never pretends to be anything it is not. It stays focused on its simple story. It gets maudlin and repetitive at times. It never tries to play to anyone. It assumes anyone who watches this film will be like-minded. It knows it is preaching to the choir.

I’m not in the choir, but I appreciate what they’ve done. This film is nothing to be ashamed of. People of all faiths appreciate sincerity. This is not about Christianity but a sincere faith in something greater than us. There is no question that countless abominations and atrocities have been done in the name of religious faith, but that’s a discussion for another time. That’s not what Heaven Is for Real is about.

Atheists will scoff. It would take thousands of pages of arguments to outline what atheists don’t know. I can’t even begin to get into that discussion, because it would never end. I will simply recommend Heaven Is for Real as a wholesome and heartfelt family film. In the meantime, the battles over God’s existence will continue.

Bears Under The Skin