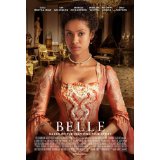 There is a famous painting from 1779 of Dido Elizabeth Belle with her cousin Lady Elizabeth Murray which is owned by the present Earl of Mansfield and rests in Perth Palace. It is the inspiration for the movie Belle. The history of events that swirled around Belle are pertinent to this day. The film doesn’t always hold to historical accuracy, but mostly in matters that do not aid the excellent story being told. The historical inaccuracies are minor and mostly irrelevant. Here is what is true. Belle is the daughter of Admiral Sir John Lindsay and an enslaved African, Maria Belle. Lindsay had his uncle, William Murray, take care of her at his estate. Murray was the first earl of Mansfield and chief magistrate of England. He also took in Lady Elizabeth Murray, another niece, when her mother died. Mansfield may have been the most powerful man in England at the time and presided over many monumental decisions of British law. The decision that this film deals with is based on the Zong massacre and its ramifications. A slave ship threw its slaves overboard chained together to claim the insurance. The thing that is remarkable about the film is that it navigates all these issues with intelligence and clarity. The historical inaccuracy I mentioned that was wisely circumvented was to make Belle the epitome of a Jane Austin heroine. Belle, in this movie, is sheer perfection and a joy. It isn’t possible that the real Belle could have been so wonderful.

The cast is superb led by Tom Wilkinson, Emily Watson, Miranda Richardson, Penelope Wilton, Tom Felton and Matthew Goode. Belle is played by Gugu Mbatha-Raw, who has been around for a while in things like Larry Crowne and British television but is holding center stage here. She is the picture of aristocracy and intelligence and sensitivity and grace. She weathers the small and big slights that her unique situation delivers to her. Lord Mansfield (Wilkinson) comes to love her as if she was his daughter, but he also must navigate through mores of English society. The story plays out like an Austin novel with courting and marriage as a goal and full of complexities in execution. That is when the Zong case starts to figure more prominently in the story. The son of a minister, John Davinier (Sam Reid) is given the opportunity to clerk for Lord Mansfield. He demonstrates strong feelings about the morality of this case. He also encounters the fiercely intelligent Belle who looks down on him in her early meetings. Belle, despite being a mulatto, is part of the aristocracy. When her father dies, she is left a fortune, which entices a member of a good family to court her.

The hypocrisy and moral weaknesses of the time are nicely laid out. But the seeds of the age of enlightenment are beginning to play out, and it will be Lord Mansfield who will decide many of the most vital issues of the day. They are decisions that will affect history from then on. Part of what weighs on Mansfield is that many think Belle will effect his decision. For Mansfield, it is a matter of the law based on what is fair and right for the time. It is obvious Belle will slowly learn more and more of the cruelty and barbarity that affects those of her color. Belle has been shielded most of her adult life and only had to deal with minor indignities, in comparison to the murder and torture of others. Two men vie for her, and she must decide whether she should follow the rules of society or the rules of her heart. What becomes more and more obvious to her is that her sheltered life has hidden the truth of the world from her, the truth that slavery was considered a necessity for centuries because it was expedient and lucrative. She breaks free from the shackles of gentility to find people willing to show her the horrors of her society.

Belle is enormously satisfying both intellectually and emotionally. It swept me up as much as Pride and Prejudice or Sense and Sensibility would, but with a new twist.

For those who love high-toned British drama like Downton Abbey, I consider this a step up.

X-Men: Days of Future Past The First World War – The Complete Series