Posted in: No Huddle by Brent Lorentson on September 15th, 2014 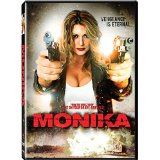 Writer and director Steven R. Monroe has made a decent career in genre filmmaking and since his remake of I Spit on Your Grave gained some moderate success.  Monroe is one of those directors that I feel has a great film in him but the right project just hasn’t crossed his path.  Though many of his creative efforts have been on more meager budgets, Monroe still manages to pull together tight little films.  Unfortunately with Monika he may have bit off a little more than he should have with his new supernatural revenge film.

Despite the title, Reagan (Jason Wiles) is the “hero” of this revenge fueled romp.  Reagan takes off from Los Angeles to a small motel just of the Vegas strip.  Reagan isn’t your average everyday fellow, in fact he has a special gift, one that allows him to glimpse into the future.  These premonitions that haunt him revolve around a beautiful blonde Monika (Cerina Vincent) that he meets just outside of his friend’s motel room.  Rather than wait around for his friend, Reagan sets out for a good time on the town with Monika.  Unfortunately when Reagan wakes up the next morning it is only to discover that this heavenly night with this blonde beauty couldn’t have occurred since Monika was murdered the day before.

This is a fun jumping off point for the film but where it finds itself shooting itself in the foot are with its ridiculous over the top villains that are responsible for killing Monika.  It’s not simply one character but the entire group of villains that just drag this film down to just being silly and at points laughably bad.  Listening to the crime boss scream and carry on about how he wants his money is about as menacing as a four year old throwing a tantrum in a toy store because he can’t get the toy he wants.

But it is the return of Monika that left me feeling raw.  If she has returned as a vengeful spirit here to avenge her death and right the wrongs that have occurred ala The Crow, then why is she wasting her time trying to seduce this poor schmuck Reagan at the motel?  I mean she’s dead, back to life but for some reason feels the need to get cozy in bed with some stranger before even setting off to kill those responsible for killing her and members of her family.  Her meddling around causes so much more chaos and death you start to wonder if the world would be better off she just remained dead.

Visually I appreciated the world Monroe has created for the viewer.  Clues to the films ending are all over the place so long as the viewer knows what to look for.  Though I do wish there were not so many filters in place throughout the film.

What the film has going for it is as the film ramps up for the final act we get a satisfying showdown between our heroes and villains that help make up for the films previous missteps.  But then the film keeps going.  Instead of just giving the viewer the slightest bit of ambiguity they feel the need to explain everything and tie it all together.  I don’t like getting into spoilers or a films ending but this simply ruined the experience for me.

To sum it up, Monika is a decent little revenge thriller with a fun supernatural element added in.  Only the next time I watch this I’m stopping it just about 5 minutes before the credits roll.

Brent Lorentson is a horror writer and film critic based out of Tampa, Florida. With a BA in Digital Film, he co-wrote and co-directed Scavenger Hunt. His short stories have appeared in various horror anthologies. In 2019 his short script Fertile Blood will be a part of the anthology horror film Slumber Party. He is currently working on his first novel A Dark and Secret Place set to be released in late 2019. Favorite Films: Taxi Driver, Fight Club, I Saw the Devil, The Wild Bunch, Dawn of the Dead, A Clockwork Orange, Pulp Fiction, Heathers, The Monster Squad, and High Fidelity.
Supernatural: Season 9 (Blu-ray) Exclusive Interview With Joseph Millson Of The Dead 2: India