Posted in: No Huddle by Gino Sassani on September 17th, 2014 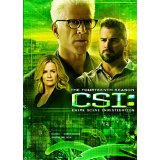 CSI is one of the longest-running shows on television. There are still a great number of original or early-years cast members still there. But I think it’s actually the changes that have allowed the show to rediscover itself once again. It’s actually been a good thing for the series and the franchise. It’s a family again. That’s no dig on anyone who has left. It’s just that I like this group a lot, and we’ve been able to see stories that just would not have been done in the old days. It has new legs, and I think we just might be in it for the long haul.

For the two or three people on the planet who don’t know, the idea is actually quite a simple one. The CSI  night shift crime scene investigators utilize all of the latest science to solve often brutal crimes. Instead of guns, these detectives come packing microscopes and test tubes. If you want to know more about the previous seasons and spinoff shows, bang it here to catch up: CSI Reviews.

Grissom’s wife, still on the team, is feisty Sarah Sidle (Fox). Promoted from the DNA lab is Greg Sanders (Szmanda). Sanders is often the comic relief, and while a solid team member, often gets into a spot of trouble. This season he’s accused of screwing up evidence that has kept an “innocent” man behind bars. Nick Stokes (Eads) is the macho man in the group and pretty much the senior CSI. He’s had to take on much more of a leadership role now. Hodges (Langham), looked up to Grissom and has had to step up his game in the lab since his mentor left. He’s the guy who takes some getting used to and not the most respected in the lab. He’s slowly becoming my favorite character. The team often works with Lt. Brass (Guilfoyle) and medical examiner Robbins (Hall). Together they follow the evidence wherever it might take them. Of course, the new leader is Ted Danson’s DB Russell.  This is the best new character to enter the franchise in a very long time. Unlike previous CSI folks, he has a wife and kids. We see him interact with a family. He’s a bit of an oddball, much as Grissom was. Instead of bugs, he grows mushrooms in his office. He gets down and dirty, often lying with a victim to get their perspective. He’s a new kind of investigator, and he rubs Brass the wrong way for a while.  He has an almost counterculture mellow feel that is a blast of fresh air for the show.

Morgan (Harnois) is Ecklie’s estranged daughter. She’s followed in Dad’s footsteps and came looking for a job with the team. She ends up falling for Hodges, whose own mother has fallen for Ecklie. How’s that for a double date? Jaclyn Smith stars as Hodge’s mom. Now we know why a grown man still lives with his mother. Fin has history with Russell. He fired her at his last job in Seattle. She can be a pain in the behind and is a female Quincy-type character. Elisabeth Shue plays Julie Finlay. She’s Catherine’s replacement.

So what does a show do when they’re going into their 14th season? For CSI the welcome news is to go a little more old-school. The season went back to being about the cases and the forensics of the team. Yes, the chemistry of the team remains, and we do get to see their stories. Someone somewhere obviously decided to take a step back and deliver what made the show so popular to begin with.

That doesn’t mean there aren’t episodes devoted to each of the regulars. The season begins with Brass dealing with his daughter and her tragic turn to crime.  Greg has to defend himself from the charges I mentioned earlier. Hodges gets a hot Italian girlfriend but gives her up to remain on the team. I never said he was smart. Sarah gets to be the focus of the show’s 300th episode. We get treated to newly filmed flashbacks that deal with her first-ever case now coming back to her. Catherine Willows returns in these episodes. It’s sad that we did not get to see Grissom in new footage. There’s also a ladies’ night out episode that turns bad, and Finley is nearly killed and raped. It focuses on Sarah, Morgan and Finley. They also killed Santa for the Christmas episode. Doc Robbins goes south of the border where he befriends a Mexican medical examiner.

The season also launched the third spinoff with a back-door pilot. The show will be called CSI-Cybercrimes and feature Patricia Arquette as an investigator who looks into crimes online.

Gino Sassani is a member of the Southeastern Film Critic's Association (SEFCA). He is a film and television critic based in Tampa, Florida. He's also the Senior Editor here at Upcomingdiscs. Gino started reviewing films in the early 1990's as a segment of his local television show Focus. He's an award-winning recording artist for Omega Records. Gino is currently working on his 8th album Merchants & Mercenaries. Gino took over Upcomingdiscs Dec 1, 2008. He works out of a home theater he calls The Reel World. Favorite films: The Godfather, The Godfather Part II, The Body Snatcher (Val Lewton film with Karloff and Lugosi, not the pod people film), Unforgiven, Gladiator, The Lion King, Jaws, Son Of Frankenstein, The Good, The Bad And The Ugly, and Monsters, Inc.
Exclusive Interview With Joseph Millson Of The Dead 2: India Spartacus: The Complete Series (Blu-ray)