Posted in: No Huddle by Brent Lorentson on September 24th, 2014 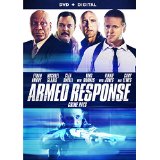 On first glance, the idea for a comedy about two best friends who are failing security system installers isn’t exactly the film I’d find myself excited to watch.  It was a title I went into with no expectations, and by the time it was over I found myself realizing I had had myself a good time with this title.  Armed Response is what happens when a clever and unique script comes along with the right cast to fill in the parts.  This isn’t a film trying to become a classic in the heist genre, but instead it just wants to be an entertaining viewing experience, and it excels at doing just that.

Kevin (Ethan Embry) and Bruce (Michael Gladis) are longtime best friends who have gotten together to start up an independently-run security system installation business.  These are the kind of friends we’ve seen before, the unambitious man-children who struggle with their careers day after day.  At first glance the obvious comparison would be to Dante and Randel in Clerks, only Kevin and Bruce come off a little more depressing.  These are not characters who have any big goals planned other than to play video games and get into bar brawls with their rivals, members of the IDT security force.  It’s their lack of drive that makes it difficult to want to like these characters.

Kevin seems to be in this dead-end kind of rut in all aspects of his life, since he doesn’t seem to have any plans with his girlfriend Lena (Clea DuVall).  Lena, of course, wants more in her life and is willing to settle with Kevin so long as he at least finds something he can be passionate about pursuing, but this seems to even be too much for him.  Oddly enough, what finally sparks some passion into the lives of Kevin and Bruce is a plan that involves them robbing homes to convince their owners they need a home security system.  It’s a solid scam and it helps their business as well, but of course things go sour after they rob the wrong home.

What’s surprising is the film starts off with a sense of humor, where it wants us to have fun with these likeable losers.  What the viewer won’t see coming is how the film takes a much darker turning point and doesn’t look back.  The problem is, despite the danger we see Kevin and Bruce get into, it’s hard to care about what could happen to them.  That’s the problem of having apathetic characters in distress; if they don’t care enough about themselves or their loved ones, how are we supposed to care as viewers?

Cary Elwes, whom many will recognize from The Princess Bride, comes into this film and gives it his all as a quirky drug dealer.  Elwes is a guy I feel we just don’t get to see enough of, and this is a performance where he seems to be having a good time playing an over-the-top sadist who enjoys torturing people with unique kitchen tools.

This isn’t a film with much substance, but at least it has a good time getting us through this ridiculous story of failing security guy to rich bartender in the Caribbean.  For those that see names like Vinnie Jones, Alan Arkin, Adam Arkin and Ving Rhames filling out this cast, just be warned these performances are nothing more than walk on roles, though Adam Arkin has the most sizeable part of the bunch.  Though I doubt this is a film I’ll be talking about a year from now, it was still fun at least.

Brent Lorentson is a horror writer and film critic based out of Tampa, Florida. With a BA in Digital Film, he co-wrote and co-directed Scavenger Hunt. His short stories have appeared in various horror anthologies. In 2019 his short script Fertile Blood will be a part of the anthology horror film Slumber Party. He is currently working on his first novel A Dark and Secret Place set to be released in late 2019. Favorite Films: Taxi Driver, Fight Club, I Saw the Devil, The Wild Bunch, Dawn of the Dead, A Clockwork Orange, Pulp Fiction, Heathers, The Monster Squad, and High Fidelity.
Revelation Trail Grey’s Anatomy: Season 10