Posted in: No Huddle by Brent Lorentson on October 20th, 2014 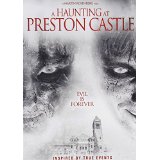 For fans of many of the ghost-hunting shows, Preston Castle is a location many will already be familiar with.  Once a former reform school for boys that opened in 1894 and finally shut down in the 1960’s, it was a location rumored to hold many atrocities against its young occupants.  Whether you are a believer in the supernatural or not, Preston Castle is a location that upon appearance is beautiful as well as foreboding, and is the perfect location for a haunted house film.  Of course the film boasts that it is inspired by true events, but I don’t think anyone should exactly hold the filmmakers up to a fact-checking examination, but instead just simply sit back and enjoy the ride.

Liz (Mackenzie Firgens) is a young and brokenhearted college student who has returned home.  Thankfully for Liz, her best friend Ashley (Heather Tocquigny) is waiting for her back home and is eager and to do what she can to cheer up her best friend.  From the start what works well for this film is the onscreen chemistry we see between the two actresses.  Independent films usually suffer from poor casting decisions, but this is a case where the two work well playing off one another. It is very believable that these two could be best of friends, and this benefits the film later once things start to go sour.

In an effort to cheer up Liz, Ashley attempts to set her up with Danny (Jake White) who was Liz’s boyfriend back in their high school days.  I understand you need a story and motivation to move your characters into going to a haunted location, but this was a bit of a stretch for me. After all, if you are trying to woo an ex, is it really a good idea to invite her and her friend to an abandoned building?  Not because you’re afraid it’s haunted, but if an ex invites me out for a romantic night out at the local abandoned haunted reform school I’m making darn sure they don’t have any stray axes or knives stashed away to kill me.  Maybe it’s a cynical way to see things, but being with an ex in abandoned location just seems hinky to me.

Ashley joins the budding lovebirds as they venture into Preston Castle.  Using the actual location is what makes this film work.  The production value they get out of this naturally decaying location would be in the millions if they had to recreate this; every doorway, every hall is filled with so much history, and it translates beautifully through the lens.  The even better decision made here is that the film is not found-footage.  Liz carries around a handheld camera and Ashley uses her camera phone in scenes as well, but this only adds to the presentation giving us a new perspective rather than the film having to rely on the footage.

The trio does a good job at giving convincing performances, and there is some nice camera work throughout the film.  Where the film is lacking are the special FX shots. This is a situation where less would have been so much more effective.  The shadows FX were nice and creepy, but when the film progresses and we get to see the ghosts haunting the location, it simply was a misfire.  This isn’t a big FX film, nor is it backed by a studio that has WETA quality FX, so I’m willing to give the film some leeway; it’s a situation where I feel so much more could have been done in sound editing and design and just simply removed the more ghostly FX.

For a low-budget film this makes for a nice viewing late at night when you’re looking for something that is a little bit creepy.  If you are familiar with the location from the numerous ghost-hunting shows, it is also a fun viewing experience as well and helps get you in the Halloween spirit.  This isn’t one you’ll be re-watching as a new holiday tradition, but it’s good for when you do not want to dust off the numerous horror films you’ve seen many times before.

Brent Lorentson is a horror writer and film critic based out of Tampa, Florida. With a BA in Digital Film, he co-wrote and co-directed Scavenger Hunt. His short stories have appeared in various horror anthologies. In 2019 his short script Fertile Blood will be a part of the anthology horror film Slumber Party. He is currently working on his first novel A Dark and Secret Place set to be released in late 2019. Favorite Films: Taxi Driver, Fight Club, I Saw the Devil, The Wild Bunch, Dawn of the Dead, A Clockwork Orange, Pulp Fiction, Heathers, The Monster Squad, and High Fidelity.
“31 Nights Of Terror” Contest – Win Under Wraps From Arc Entertainment The Last Supper (Blu-ray)