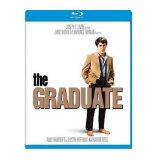 It’s a classic line from The Graduate, yet it seems impossible to sum up the career of Mike Nichols, who died Wednesday, in a single word. Maybe that word is EGOT. Nichols was the rare entertainer to hit an awards show grand slam, winning Emmys (for directing and producing Angels in America and Wit on HBO), a Grammy (for the comedy album “An Evening with Mike Nichols and Elaine May”), an Oscar (for directing The Graduate) and Tonys (for directing and producing both plays and musicals). But that only scratches the surface of the impact Nichols made. Click through and join us for a look at his eclectic work in the UpcomingDiscs archives.

Contest: Win Northpole On DVD From Arc Entertainment Into the Storm (Blu-ray)