Posted in: The Reel World by Gino Sassani on November 21st, 2014 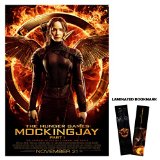 “All we need now is the perfect message”.

It has almost become expected. When a successful franchise based on a series of books reaches the end of the published material, studios start to think about the approaching end with some dread. One way to put off the inevitable is to split the final book into two films. It worked for Harry Potter and Twilight. Peter Jackson managed to squeeze three long films out of one Tolkien book. For most of these cases it was a severe case of milking those final chapters for all that they’re worth and then going beyond that. That’s simply not the case with Mockingjay Part I. The book itself has two very distinctive parts, and telling this story in a single film would not have done justice to the material. Trust me when I tell you that you’ll feel like you’ve gotten a complete story, but one that has more story left to tell. The Hunger Games: Mockingjay Part I is the beginning of a payoff that has been promised since the first film debuted just two years ago. Yes, any film that contains Part I in the title might appear a little intimidating with promises of an untold story and a portent to a feeling of dissatisfaction. Don’t let any of that keep you from the best film in the franchise. Take the risk. You’ll be well rewarded for your two-hour investment.

Mockingjay Part I picks up pretty shortly after the end of Catching Fire. Katniss (Lawrence) has been taken to the surviving camp of District 13, long believed destroyed. They have established a base underground where the revolution has been gaining steam since long before Katniss and her own acts of rebellion. Here they are led by their own President Coin (Moore), and gamesmaster Plutarch (Hoffman) serves as her chief advisor. They had hoped to use Katniss as the face of the revolution, but she’s not so sure. Katniss is suffering nightmares and is far more interested in getting Peeta (Hutcherson) back from his captivity in The Capitol. Still, they attempt to shape their message with staged videos that can be leaked to the other districts to inspire others to join the fight. Katniss isn’t handling it so well. The whole thing has a Wag The Dog feel to it until Haymitch (Harrelson) convinces them that it all needs to be real. After a visit to the devastation that was once her home in District 12 and the bombing of a field hospital in another District, Katniss allows that inner hero to emerge, and the rebellion is on. It’s a nice coincidence that Woody Harrelson was a part of Wag The Dog and almost appears here to teach these revolutionaries the lesson from that film. His part is rather small, but it’s certainly pivotal particularly in how it wakes up the hero in Katniss.

The film brings back many of the franchise’s popular characters. Jeffrey Wright returns as Beetee. Remember that he’s the guy who wants to fry the bad guys in the games in Catching Fire. Now he’s the rebellion’s version of Bond’s Q. He’s developed some cool weapons for Katniss to go along with the uniform/costume developed for her. He’s also the tech wizard trying to infiltrate The Capitol’s signals. In The Capitol, Josh Hutcherson’s Peeta is being used as a propaganda tool by Donald Sutherland’s desperate President Snow to counter Katniss’s impact. There are too many good performances to rate here. Imagine that. A big fantasy f/x film that delivers wonderful character moments and subtle but powerful performances. You don’t have to imagine. Mockingjay Part I will give you more than a fleeting glimpse of what that looks like.

Sam Claflin returns as Finnick. Liam Hemsworth gets a larger role as Gale, who is becoming quite the revolutionary. Even Elizabeth Banks gets to create a toned-down version of Effie, who must make do without gold trim or wigs and has to go with the dreaded jumpsuit look. It’s one of those small but effective nuances of the film that shows a tremendous character evolution to these faces.

The most important thing to know about Mockingjay Part I is that the tone is quite different than the two previous outings. I’m happy to say that the titular games themselves are not a part of the film. It’s somewhat ironic that I’ve found those to be the weakest parts of both the first two movies. This movie delves completely into the geopolitics of this world like never before. Fans expecting huge battles will be disappointed. This revolution is more about the chess game of moves and countermoves. It’s a battle first for the hearts and minds of the rest of the population that matters here, and it’s this story that makes Mockingjay Part I such a compelling story.

That’s not to say there isn’t plenty of action. The huge set pieces exist more to accent the emotional beats. We see the results of the carnage and not so much the acts themselves. These are what serve to bring out the hero in Katniss, and the film allows its special effects and big-budget bang to take us to that same place emotionally. The beauty here is that these huge moments remain ingrained in our memories long after the adrenaline rush is over. It’s forward-thinking moviemaking here at its best. This is one of the best examples you’ll find of using cutting edge f/x to enhance the story instead of serving as a distraction, or even worse, existing as the entire reason for seeing the film at all.

Nowhere is the change in tone more apparent than in the returning character of Caesar Flickerman, played by the wonderfully talented Stanley Tucci. The previous films had Tucci reaching for those manic over-the-top moments at almost every turn. Who can forget that showmanship laugh and used-car-salesman demeanor? His limited screentime here is incredibly understated. He’s quiet, almost somber and thoughtful in his speech. It’s a perfect underscore to how much things have changed from one movie to the next. This is no longer the same world, and it’s so important that the films reflect that reality. I love character moments where one sees the change. I call them Al Pacino/Michael Corleone moments. This entire movie is one of those moments. Everyone and everything has changed, and the best thing Mockingjay Part I does is make that as clear as possible without ever having to beat you over the head with the themes.

Director Francis Lawrence trusts his audience, a rare trait today. He has faith that you’ll pick up on the shift in mood and tone. He expects you to understand the themes and ideals behind the revolution without having to remind you every five minutes. He lets the characters tell the story and credits you, the viewer, to keep up. There aren’t twenty speeches about the inequality of the society. There isn’t a ton of exposition to remind you who the bad guys are, why they’re bad, and by the way why they should remind you of one political party or the other in today’s life. Judge the film by the actions and reward Lawrence for trusting you all the way. Some will be disappointed and complain that there wasn’t enough action or that it was too slow in parts. OK, so maybe some of these directors who feel the need to hit you over the head (Sorkin) have a point. Nah. I’d rather dismiss those folks as just having attended the wrong movie. Don’t dumb this stuff down for those folks. Put a joystick in their hand and leave them alone.

The film does a pretty good job of exploring the idea of historical perspective. The difference between a rebellion and a revolution all depends on which side of the conflict you find yourself. I’m a history teacher, and I have a copy of a British school textbook which quite prominently describes the events of 1776 as The Colonial Rebellion. You might know it better as The American Revolution. After 200+ years children are still taught to view these events in rather starkly conflicting terms.

It’s hard not to be conscience of the fact that this is the last complete film for actor Phillip Seymour Hoffman. He’ll be in the next film, but there were scenes he had yet to film. How they’ll deal with that we will soon know. His part is vital here, and it will be a strong exit for the actor and his legacy. Now that we’ve set the proper emotional tone, I suspect that next year we’ll get to see the real fight. I’m sure it will be spectacular visually but with the added advantage to having been properly set up. November 2015 is a long way to go. Waiting is going to be the hardest part of this film. “It’s the worst torture in the world, waiting when there’s nothing you can do.”

Gino Sassani is a member of the Southeastern Film Critic's Association (SEFCA). He is a film and television critic based in Tampa, Florida. He's also the Senior Editor here at Upcomingdiscs. Gino started reviewing films in the early 1990's as a segment of his local television show Focus. He's an award-winning recording artist for Omega Records. Gino is currently working on his 8th album Merchants & Mercenaries. Gino took over Upcomingdiscs Dec 1, 2008. He works out of a home theater he calls The Reel World. Favorite films: The Godfather, The Godfather Part II, The Body Snatcher (Val Lewton film with Karloff and Lugosi, not the pod people film), Unforgiven, Gladiator, The Lion King, Jaws, Son Of Frankenstein, The Good, The Bad And The Ugly, and Monsters, Inc.
Into the Storm (Blu-ray) The Expendables 3 (Blu-ray)