Posted in: Podcasts by Gino Sassani on December 29th, 2014 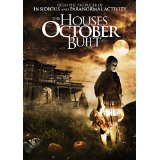 On Jan 6th, 2015 Image Entertainment will be releasing The Houses That October Built on DVD and Blu-ray. It’s a found footage film that chronicles a group of friends who take to the road to visit independent haunted houses (haunts) during Halloween season. It’s a frightening tale that leads them to the ultimate fright. The film was written by Zack Andrews and Bobby Roe. Roe also directed the film. Both of these guys also appear in the film. I recently had the opportunity to chat with both creative talents about the upcoming film. Now you can check out what they had to say. Bang it here to listen in on my chat with Zack and Bobby.

Gino Sassani is a member of the Southeastern Film Critic's Association (SEFCA). He is a film and television critic based in Tampa, Florida. He's also the Senior Editor here at Upcomingdiscs. Gino started reviewing films in the early 1990's as a segment of his local television show Focus. He's an award-winning recording artist for Omega Records. Gino is currently working on his 8th album Merchants & Mercenaries. Gino took over Upcomingdiscs Dec 1, 2008. He works out of a home theater he calls The Reel World. Favorite films: The Godfather, The Godfather Part II, The Body Snatcher (Val Lewton film with Karloff and Lugosi, not the pod people film), Unforgiven, Gladiator, The Lion King, Jaws, Son Of Frankenstein, The Good, The Bad And The Ugly, and Monsters, Inc.
12 Days Of Christmas Giveaways – Day 5: Power Rangers Megaforce the Mysterious Robo 2 12 Days Of Christmas Giveaways – Day 6: Lifetime Christmas Movie Collection