Posted in: No Huddle by Brent Lorentson on December 31st, 2014 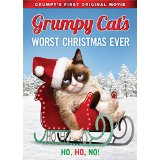 It’s just about impossible to not know who Grumpy Cat is; the loveable grumpy-faced cat that has been the subject of numerous memes has become an internet sensation that has its own product line.  I love cats, so I didn’t see anything wrong with the celebrity this feline has gained, but the moment I heard Grumpy Cat would be getting to star in a movie – well, I was about to say maybe a movie would be a bit much…then again I was easily reminded that such pop culture dregs such as the Kardashians have their own show; perhaps a film about a cat would be a step up from them.  Before even watching the film, I could say yes, Grumpy Cat is a far more respectable celebrity, heck, even role model, than anyone with the last name Kardashian or West, but how does the movie fare?  Well, to put it nicely, it’s a stinker, but what more could you expect?

Growing up in the 80’s I had a lot of films starring various animals in the leads, everything from Benji, The Bear to Disney classics like The Cat From Outer Space, and the Shaggy DA.  The one thing all these films had in common is that they at least attempted to care about the characters and not talk down to the audience.  The films I mentioned still hold up, whether it be because of their charm or artistic merit, whereas Grumpy Cat’s Worst Christmas Ever is nothing more than a shameless cash grab to target kids and fans of Lifetime films.

Aubrey Plaza (Life After Beth) fills in as the voice of Grumpy, I’m a fan of her work, but just as the case with Bill Murray as the voice of Garfield, having a well-fit voice for a character just isn’t enough to make a film.  So what is the film all about aside from its moments of being self-referential and poking fun of itself and its viewers for continuing to watch the film?

The human star of the film is Chrystal (Megan Charpentier), a young girl who is having trouble making friends and spends most of her free time volunteering at a pet store that is in the same mall as where her mom works.  In a vulnerable time of loneliness, a mysterious Santa Claus approaches Chrystal with a magical coin that can grant her a single wish.  The wish that she makes is to find a true friend; lo and behold, that friend turns out to be Grumpy.  If the film was nothing more than these two characters getting along it wouldn’t be so bad, but a straightforward story about a girl and her feline friend isn’t enough.  Instead what is thrown in are two knuckleheads who have a plan to steal a million dollar pooch, a dog that once it’s sold is supposed to save the pet store from closing.  What follows are basically hijinks that one would expect from a Home Alone movie, only not nearly as impactful.

As the film plays, there are cutaways from what would have been meant for commercial breaks on TV; the cutaways are of Grumpy Cat asking with shock and awe about how the viewer is still watching.  I was wondering this myself, but somehow I made it through to the end.

I’ve considered that this is for kids, but still I have to say this is the worst film I’ve seen all year, and it’s a shame, because this could have been something charming and cute for the whole family.  If Lifetime still has the rights and they plan on doing a sequel, all I ask is please remember people will be wanting to watch this; you don’t need anything big or extravagant, just simply a film about a little girl and her cat. Forget all the nonsense of bumbling thieves.  Give us a story with heart, and it will go a lot further than this cinematic lump of coal.

Brent Lorentson is a horror writer and film critic based out of Tampa, Florida. With a BA in Digital Film, he co-wrote and co-directed Scavenger Hunt. His short stories have appeared in various horror anthologies. In 2019 his short script Fertile Blood will be a part of the anthology horror film Slumber Party. He is currently working on his first novel A Dark and Secret Place set to be released in late 2019. Favorite Films: Taxi Driver, Fight Club, I Saw the Devil, The Wild Bunch, Dawn of the Dead, A Clockwork Orange, Pulp Fiction, Heathers, The Monster Squad, and High Fidelity.
12 Days Of Christmas Giveaways – Day 6: Lifetime Christmas Movie Collection 12 Days Of Christmas Giveaways – Day 7: Duck Dynasty: Season 4-6