Posted in: No Huddle by Gino Sassani on January 5th, 2015 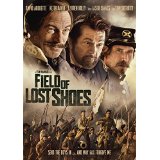 “Every year a parade is held at the Virginia Military Institute to honor cadets who gave their lives at a turning point during the American Civil War. On May 15, 1864 seven friends marched into the Battle of New Market. Only four came out.”

There have been many films made about the Civil War, from the classic Gone With The Wind to the docudrama Gettysburg. It’s a story that deserves being told and thereby remaining in our memory now that none of the principals are alive to tell the story. Field Of Lost Shoes doesn’t really fit the classic or docudrama categories. The film feels very much like a stage production and concentrates its story not so much on the fighting but the characters who found themselves thrust into the very jaws of history. Many of the characters we know well in our collective memory. There is, of course Abraham Lincoln (Krebs). Both sides of the conflict are represented by Ulysses S. Grant (Skerritt) from the Union Army and Col. John C. Breckinridge (Isaacs) from the Confederate Army. They play a pivotal role in the war and perhaps in this story, but Field Of Lost Shoes is not about them. It’s about the seven cadets who suddenly found themselves in combat for causes they did not necessarily even believe in. What they did believe in was duty and honor, and that is the repeating set of themes you’ll find here.

The cadets include Garland Jefferson (Croft), who was a direct descendent of Thomas Jefferson. John Wise (Benward) is the son of a Virginia governor who was against secession. He had been exposed to the injustices of a slave auction as a young boy. His father wanted him to see for himself the realities of slavery where he watched a family get broken up and several young slaves beaten. While John was training as a Confederate soldier and eager to fight for the Confederacy this character gives us one of the best looks at the actual causes of the American Civil War. To say it was about slavery is an oversimplification often believed. John Wise is an example of a man fighting against what he believed to be Federal interference in the sovereignty of his state. It’s a mistake to believe all Confederate soldiers were racist or even pro-slavery. It’s refreshing to see these nuances explored and to help us to understand why the sacrifice of Confederate soldiers would still be honored today.

Nolan Gould plays “Sir Rat”, the newest recruit to the school. He’s a young and naive student that the others decide to take under their wing upon his arrival. While just barely a teen, he also answered the call when Jefferson Davis ordered the cadets be used in support at the Battle of New Market. While Breckinridge attempted to hold the young, inexperienced students in the rear, they went against orders and entered the front lines when there was a break in the lines. Sir Rat was one of those cadets, and freshman at the Institute are still called rats today in honor of the cadet and the nickname his patrons labeled him with.

Moses Ezekiel (Zuckerman) was a rare Jewish cadet and an inspired artist. Sam Atwill (Lloyd-Jones) falls for one of the young girls housed at the Institute in support. Ben “Duck” Colonna (Marquette) had personal reasons for wanting to enter the combat. His family had been killed in one of Grant’s raids.

Keith David stars as Old Judge, a slave who worked as a baker for the Institute and whom the seven defend when he is disciplined because of their mistake.

The film is pretty family-friendly for a war battle movie. It is no overly bloody or gory. The emphasis here is on character, and while the film is necessarily violent and depicts the battle in some detail, it’s tame by modern standards. Part of that is owed to the limited budget, but it also helps keep the film accessible to those who are fatigued by intense war scenes. The title refers to the muddy battlefield which sucked many of the cadets’ shoes into its mire. When the battle was over, surviving cadets are seen collecting the discarded shoes, creating the titular field of lost shoes.

The cast is relatively solid even if the dialog is often uneven. Again the film feels very much like a stage production. The pacing is also a bit uneven. Many of the scenes at the army camps or with Lincoln appear forced. They don’t play directly into the character story. It appears that writer Thomas Farrell and Dave Kennedy wanted to hedge their bets and give us a recognizable group of characters and events for context. I’m not sure it was necessary, as none of these filler scenes are as compelling as the more intimate story of the cadets themselves. The Battle of New Market is hardly one of the better known moments of the Civil War. This film makes it memorable, not because of any military strategy or historic significance. It’s all about these seven young men. “It’s a welcome change.”

Gino Sassani is a member of the Southeastern Film Critic's Association (SEFCA). He is a film and television critic based in Tampa, Florida. He's also the Senior Editor here at Upcomingdiscs. Gino started reviewing films in the early 1990's as a segment of his local television show Focus. He's an award-winning recording artist for Omega Records. Gino is currently working on his 8th album Merchants & Mercenaries. Gino took over Upcomingdiscs Dec 1, 2008. He works out of a home theater he calls The Reel World. Favorite films: The Godfather, The Godfather Part II, The Body Snatcher (Val Lewton film with Karloff and Lugosi, not the pod people film), Unforgiven, Gladiator, The Lion King, Jaws, Son Of Frankenstein, The Good, The Bad And The Ugly, and Monsters, Inc.
12 Days Of Christmas Giveaways – Day 11: Cartoon Network: Holiday Collection 12 Days Of Christmas Giveaways – Day 12: Dance Academy: Season 1