Posted in: No Huddle by Brent Lorentson on February 4th, 2015 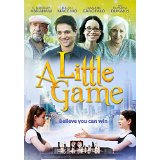 I have to admit, seeing Ralph Macchio in any role other than in The Karate Kid is a bit jarring for me.  Growing up in the 80’s, it’s hard to see Macchio and not hope for him to randomly balance on one leg and do a crane kick, but alas, decades have passed and Macchio has come a long way.  Now we get to see Macchio all grown up step into the role of dad in his new film A Little Game.  While Macchio may share the headlines of this all-star cast that includes F. Murray Abraham, Janeane Garofalo, and Olympia Dukakis, the real star of the film is a name many would be unfamiliar with, Makenna Ballard.  You may not know her name now, but after this debut performance I’m willing to bet this is only the first step in a bigger and promising career.

Max (Ballard) goes through the unfortunate hurdle of being removed from her school where she was once surrounded by her friends to being thrust into a new school so she can get a “better” education.  Though the school may look good on transcripts when applying for ivy league schools, right now Max is simply a 10-year-old girl who simply wants to be accepted by her classmates and have fun like any other 10-year-old girl would.  Unfortunately being the new girl at school attracts the attention of a rival classmate who sees Max as nothing more than competition.

As Max’s parents (Macchio and Garofalo) work overtime to help pay for Max’s education, Max also has to struggle with the loss of her grandmother Yaya (Dukakis).  It’s no surprise that in her walks home from school, Max starts up a friendship with the crotchety Norman (Abraham) whom she sees sitting alone while others around him are playing chess.  When Max propositions Norman to teach her the game of chess, little does she realize that he will eventually teach her many life lessons along the way as she learns to play the game.

A Little Game isn’t just simply about a young girl learning to play chess, but obviously a coming-of-age story for young girls.  The issue that I have with this film is really what holds this film back is that it tries so hard to force the jokes and get laughs that are just not deserved.  Whether they are depending on sound or music cues to emphasize the joke, or dealing with exaggerated expression shots, either way it distracts from the story which actually works on its own merit.  Speaking of forced moments, when a character dies there is an exterior shot that gives us nothing but people filing into a church; this is an insert shot that simply never should have made it into the final cut and simply detracts from the performances.

When we get to see Max under the tutelage of Norman the film comes alive, and it’s a shame these lessons don’t last longer, because the chemistry between these two is a beautiful thing that I haven’t seen in a while with this kind of film.  As the film builds steadily towards Max competing in a chess match with her school rival you would hope for perhaps more conflict, something to raise the stakes, but we don’t get that, and instead we get what feels like a rushed ending that just feels too tidy and neat.

I understand the filmmakers were not setting out to do the female version of Bobby Fischer, but there were some missed opportunities to at least attempt to make these chess sequences seem more dramatic.  Even when Max sets the stakes, you can’t help but say to yourself, “She’s ten, what makes her think this is even an option?”  I won’t say anything more about it, but it’s a distracting moment that simply pulled me out of the film.

Going into the film without any big expectations, I can say I enjoyed the film more than I expected, and that is largely in part to some great casting choices.  Though the actual chess sequences between Ballard and Abraham are too few in my opinion, it is in these sequences where you get to see some excellent acting and filmmaking.

Brent Lorentson is a horror writer and film critic based out of Tampa, Florida. With a BA in Digital Film, he co-wrote and co-directed Scavenger Hunt. His short stories have appeared in various horror anthologies. In 2019 his short script Fertile Blood will be a part of the anthology horror film Slumber Party. He is currently working on his first novel A Dark and Secret Place set to be released in late 2019. Favorite Films: Taxi Driver, Fight Club, I Saw the Devil, The Wild Bunch, Dawn of the Dead, A Clockwork Orange, Pulp Fiction, Heathers, The Monster Squad, and High Fidelity.
Maison Close: Season One (Blu-ray) Exclusive Interview With Felissa Rose From Zombie Killers: Elephant’s Graveyard