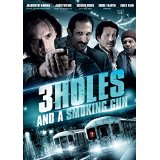 James Wilder gets to play a killer screenwriter in 3 Holes And A Smoking Gun. He’s getting quite a bit of recognition for the performance. In addition to snagging the Independent Spirit Award at the upcoming Garden State Film Festival, he also won Best Actor Award at the Winter Film Awards. If you want to know why, you should check out the film. In the meantime, I had a chance to talk to James about it all. You can catch some of his insights before you watch the film. Bang it here to listen in on my chat with James Wilder.

Gino Sassani is a member of the Southeastern Film Critic's Association (SEFCA). He is a film and television critic based in Tampa, Florida. He's also the Senior Editor here at Upcomingdiscs. Gino started reviewing films in the early 1990's as a segment of his local television show Focus. He's an award-winning recording artist for Omega Records. Gino is currently working on his 8th album Merchants & Mercenaries. Gino took over Upcomingdiscs Dec 1, 2008. He works out of a home theater he calls The Reel World. Favorite films: The Godfather, The Godfather Part II, The Body Snatcher (Val Lewton film with Karloff and Lugosi, not the pod people film), Unforgiven, Gladiator, The Lion King, Jaws, Son Of Frankenstein, The Good, The Bad And The Ugly, and Monsters, Inc.
Contest: Win A Copy Of Bank$tas On DVD From Arc Entertainment Da Vinci’s Demons Season 2 (Blu-ray)