Posted in: The Reel World by Brent Lorentson on March 21st, 2015 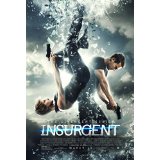 When Divergent ended, it planted the seed for the sequels that would follow.  I really enjoyed the first installment and our introduction into the factions that supported this society.  What I enjoyed most after revisiting the film is how the film handles the budding relationship between Tris (Shailene Woodley) and Four (Theo James), never too sappy but being a couple we could root for since they were both outsiders to their community.  Now that the factions and the characters have all been set up, and with the rebellion beginning to take shape at the end of the first film, Insurgent wastes no time in jumping into the story and delivering one of the better sequels in some time.

To be fair, Insurgent really is its own film. We’re no longer watching our characters train and play capture the flag, or take part in simulations to pass a test.  Things are ramped up, and our heroes are being hunted down by Jeanine (Kate Winslet) and her followers.  The charm and the innocence we saw in the first film where Tris is wide-eyed with excitement with her training is all gone, and we see this in an overly symbolic scene where we watch Tris cut off those lovely golden locks of hers.

While Tris aims to avenge her mother’s death and plans to kill Jeanine, Jeanine has ambitions of her own after discovering a device that only a Divergent can open.  When it comes to what the device is, well, I don’t want to spoil anything, but I will say it is extremely important to not just the future of the characters but everyone protected within the walls of the decayed city of Chicago.

This time around we also get to meet members of the factionless society. Their leader, as it turns out, is Evelyn (Naomi Watts) who is the thought-to-be-dead mother of Four.  What sadly just didn’t work is a dinner scene where Tris, Four, and Evelyn sit down for the first time and discuss their plans about overthrowing Jeanine and simply Four being with his mother again.  The scene seems forced by all those involved and just unnatural.  If not for how pivotal it is to the plot, it is a scene that should have been removed from the film.  Why this scene just falls flat and no one saw the need to reshoot this I don’t understand, but considering this is the film’s weakest point, thankfully there is so much more to the film that we can look past this stumble.

The star that seems to shine brighter this time around is Miles Teller as Peter, recently coming off the success of Whiplash.  The wisecracking character toes the line of being friend or foe, but every scene he’s in he steals it. I keep looking at him and seeing a version of John Cusack who has the potential to be something so much bigger.

What simply makes this film works is we see the threat our heroes are faced against from the very beginning, and the tension only grows from there. Jeanine’s soldiers at this point have no qualms with executing anyone who doesn’t cooperate, and the body count is on the rise in Insurgent.  It’s the violence that is so surprising that is constant throughout, to the point we are even seeing children being forced to commit suicide.  Seeing how Jeanine is so willing to take so many lives simply to have her device work, while never willing to bloody her hands herself, only helps make her a villain worth loathing.

As we see the simulations take place, it’s hard to not see this film as an offspring from films like The Matrix, which is somewhat what the film is, as we see Tris stepping into the character of “the chosen one” just as Neo was.  The teaser trailer revealed the first of the five simulations Tris needs to pass, and I can’t help but see the comparison being not far from Neo’s test where he has to make the impossible jump from one building to the next.  All the simulations are a variation of tests, one representing each of the five factions.  A good portion of the film’s big special effects are in these simulations, and perhaps it’s because as audiences we’ve grown accustomed to big-budget effects-heavy spectacles, but there are some stunning visuals on display here.  And the more we see how the city is in ruin, it’s impressive how far special effects work has come over the past few decades.

Sure, audiences will draw comparisons to The Hunger Games, but for me this is the series that has sucked me in more.  With two more entries to hit the screens in the next couple years, I’m excited to see how the series will come to an end.  But most importantly, what Insurgent has gotten me most excited about is the need to see Shailene Woodley and Jennifer Lawrence go head to head on the big screen.  The two young women are leading the way for kick-ass heroines on the big screen, and so far audiences love it.

Brent Lorentson is a horror writer and film critic based out of Tampa, Florida. With a BA in Digital Film, he co-wrote and co-directed Scavenger Hunt. His short stories have appeared in various horror anthologies. In 2019 his short script Fertile Blood will be a part of the anthology horror film Slumber Party. He is currently working on his first novel A Dark and Secret Place set to be released in late 2019. Favorite Films: Taxi Driver, Fight Club, I Saw the Devil, The Wild Bunch, Dawn of the Dead, A Clockwork Orange, Pulp Fiction, Heathers, The Monster Squad, and High Fidelity.
Exclusive Interview With Bryce Draper Of Muck Exclusive Interview With Steve Wolsh: Writer/Director Of Muck